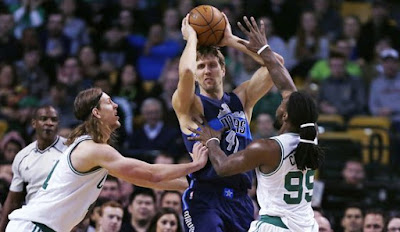 After jumping out to an 18-point lead in the first half, the Celtics fought all night to keep themselves ahead, as the Mavericks stayed at arm's length. In the end, the Mavericks gained a lead and the Celtics crumpled in a 106-102 loss.

Dirk Nowitzki's 23 points kept the Mavericks on the heels of the Celtics. And Wesley Matthews' 15-point second half (18) pushed Dallas ahead. Deron Williams and Zaza Pachulia both scored 14.

Isaiah Thomas led the Celtics with 19 points, six assists. Jared Sullinger added 12 rebounds, him and Avery Bradley both had 18 points. While Jae Crowder and David Lee both scored 14.

It only took 49 seconds for coach Stevens to call his first timeout of the second half. The Mavericks were six points away from grabbing their first lead of night and after the Celtics gave up two open looks and settled for a corner three-pointer from Amir Johnson, Stevens had seen enough.

After a hot first quarter, Avery Bradley came back in after the Celtics' first timeout in the third quarter and got the offense going again. In the first quarter -- Bradley scored 12 consecutive points, made one steal, and dished out one assist to Isaiah Thomas; all in a two-minute span.

Bradley's five points in the third quarter helped the Celtics stay ahead but the fourth quarter was a different story. Dallas opened up a 9-0 run and with 3:42 left in the game, grabbed their first lead of the night -- 96-91.

Following a timeout, the Celtics responded with a three-pointer from Jared Sullinger but struggled to make another field goal until Jae Crowder sunk a three-pointer with 25 seconds left on the game clock -- to cut the Mavericks' lead to four (102-98). Turner then stole the ball -- passed it to Crowder, where he almost converted an and-one opportunity. Crowder made both free throws but so did Deron Williams after he was intentionally fouled by Marcus Smart.

Isaiah Thomas converted a quick layup but after Raymond Felton missed two free throws, Thomas dribbled towards the Celtics hoop and lost control of the ball -- handing it over to the Mavericks. Williams made two free throws after being intentionally fouled; sealing the Mavericks win.

The Celtics will look to bounce back on Friday night, when they host the Brooklyn Nets at TD Garden.

Sure, there were a lot of questionable calls made against the Celtics but a big reason why the Mavs were able to stay close after being down by 18 was because they shot 25-of-35 from the charity line. Kelly Olynyk scored five quick points but couldn't stay on the floor after committing five fouls in ten minutes... In the fourth quarter, Dallas got their fast break going and shoved it down the Celtics' throat. The Mavs scored 18 fast break points. Williams and Felton took turns running the break and Matthews was on fire.