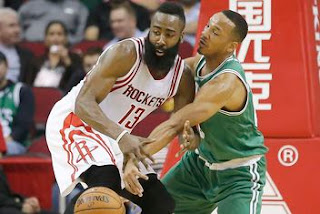 After a late second quarter run, the Celtics' defense and second half scoring turned a tied game into a 29-point lead in the fourth quarter. While nearly totaling 90 points in three quarters, the Celtics forced 22-Rockets turnovers and closed out the third quarter on a 15-0 run.

Isaiah Thomas scored a game-high 23 points and six assists. Avery Bradley scored 13 of his 21 points in the second half and Jae Crowder added 16.

Tervor Ariza's 19 points and nine steals led the Rockets. James Harden scored 16, but did most of his damage in the first half. By halftime both teams were tied at 55. Harden knocked down two three-pointers in the third quarter but the Rockets' offense couldn't find its momentum in the second half. Especially in the third quarter, when they were outscored by the Celtics, 32-13.

There was a game-changing moment in the third quarter -- when Amir Johnson couldn't handle a pass from Marcus Smart and ended up on the floor while trying to save it from going out of bounce underneath the Celtics' basket. Rockets forward Terrence Jones, while standing over Johnson, reached for the ball that Johnson had held under his arm but Johnson didn't want to give it up.

Jones proceeded to reach for the ball while standing over Johnson, and wouldn't give him enough space to get on his feet. Both teams ran over to separate the two. Isaiah Thomas and James Harden received technical fouls.

Crowder talked about the incident after the game and how it helped motivate the team.


"We had a guy down and their guy (Jones) kind of straddled (Johnson) and wouldn't let our guy get up," Crowder said. "We saw it as a sign of disrespect. We just came to his rescue, and we weren't having it. That's what sparked it." (CSNNE.com)

After playing five games in seven days, the Celtics will head home to face the Dallas Mavericks on Wednesday at TD Garden.

The Celtics defense was very active at Houston. They had 16 steals against the Rockets and made things very difficult -- especially in the second half.