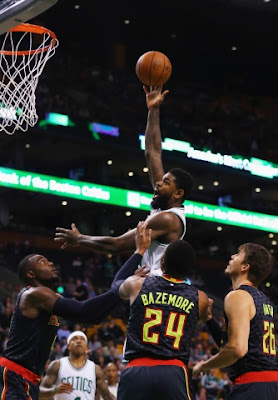 The Celtics' interior defense and second half scoring outlasted the Hawks in a 106-93 victory at TD Garden.

The Celtics closed the half on a 7-2 run, and tied the game at 47. They limited the Hawks from getting into the paint -- where they did most of their damage in the first half and opened up their biggest lead of the night in the third quarter, a 12-point advantage.

The Celtics forced 16 Hawks turnovers and sparked their offense in the third quarter. Boston scored 61 second half points and ran away with the win in the fourth quarter.

Amir Johnson got things going on the Hawks' first possession when he blocked Al Horford's shot and sparked the Celtics offense. Johnson amassed eight rebounds, three blocks and three steals to go with his 19 points. He also played phenomenal interior defense against Atlanta, limiting them from entering the paint.


"I think he' getting used to us," coach Stevens said about Johnson. "The biggest thing is that he's figuring out how we want to play, how to play off of each other. You know, our lineups have changed because of injures and that's a unique challenge for a guy  like that who's also trying to figure it all out. But defensively he gave us a presence in the paint; that showed itself true on multiple occasions today. I thought he was just really locked in, and his stats would suggest that."

After a slow start, Isaiah Thomas picked up his scoring in the second half. He finished with a game-high 23 points and 10 assists. Jared Sullinger (10 points, 10 rebounds) also had himself a double-double. And Kelly Olynyk scored 15 points off the bench.

The Celtics will hit the road this weekend for a Sunday night game against the Thunder in Oklahoma City.


Game Notes:
Team Rebounding. The Celtics out-rebounded the Hawks by a significant margin (50-35). Sullinger grabbed a team-high 10 rebounds. Johnson and Crowder each added eight, and Evan Turner pulled down five off the bench.