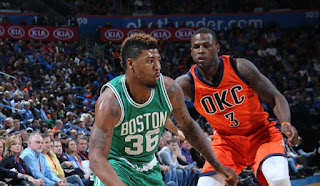 After staying within striking distance in the first half, Marcus Smart and the Celtics turned Oklahoma City's seven-point halftime lead into a double-digit lead with a 27-6, second-half run en route to a 100-85 win at Oklahoma City.


Smart scored 15 of his career-high 26 points in the third quarter, propelling the C's offense in the second half. Isaiah Thomas' nine-point fourth quarter pushed the Celtics' lead to 88-76 with 6:38 left, and Boston's defense held Oklahoma City to 11 fourth-quarter points, stifling any comeback attempt.

Smart went off, scoring his 26 points on 9-of-14 shooting (3-4 3P) opposite of Westbrook. He also played solid defense and made big stops in the second half.

Thomas finished with 20 points and eight assists. Avery Bradley returned from injury to score 14 points off the bench. Jae Crowder added 10 points, while Jared Sullinger grabbed 15 rebounds to go along with eight points.

Russell Westbrook scored a game-high 27 points and Serge Ibaka had a double-double (16 points, 10 rebounds) for the Thunder.

The Celtics will hit the road again tonight when they head to Houston for a game against the Rockets, tomorrow night.


After the game, Westbrook told reporters that he didn't think Smart's career night was 'anything special' and had this to say when one reporter told him that Smart could match up with him.

For the second consecutive night, the Celtics beat their opponent on the glass, which pushed them to big offensive runs throughout the second half. The Thunder were out-rebounded, 47-34.