Take it or Leave it – The DeMarcus Cousins Trade Debate 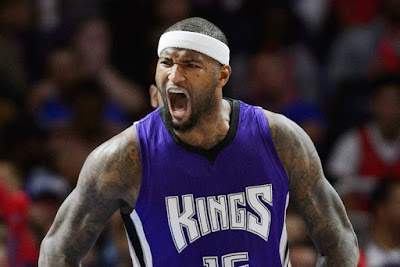 One of the most divisive players in recent NBA history is unquestionably the Kings all-star center DeMarcus Cousins. The seven-footer and super athlete has shown an MVP caliber rebounding and scoring touch. However, with his big talent comes big controversy. Over his five year career he has been often described as a 'crybaby' and 'diva' in the Sacramento locker room. A player who many believe can’t be built around and is possibly more risk than reward.

What does this have to do with the Boston Celtics you ask? Consider this your opportunity to buy a Ferrari for the price of a used BMW. Numerous NBA insiders are reporting that the Kings management is fed up with the antics of their giant star and could be open to a possible deal...

The Celtics happen to be in great position to make a deal for the superstar but would need to weigh in the giant risk factor.

The risk is simple: trade your non-protected lottery pick from the Brooklyn Nets in next year's draft, one of your rotation big men, and risk losing the 'team first' environment that has taken the last several years to build.

The NBA’s premier power player, the best center you’ve had since Robert Parish, and the potential for a franchise ruining force to take control of a young group on Causeway Street.

While the prospect of having a top-10 NBA talent is tantalizing, I can still see the nay-sayers squirming at the thought of pulling the trigger on this deal. Let me give you a few reasons why things could be different for 'DMC' in Boston:

I know this seems like I'm being bias towards the Celtics, but this young talented coach is coming off a smooth rebuilding process, and (best of all) he’s never dealt with a star of this magnitude. BUT I think it would be different for Cousins under Stevens for a few simple facts.

A. Brad is a no-nonsense coach in the locker room
B. Players love playing for him
C. He isn’t George Karl

What does this all mean?

Stevens already has the guys on his side, there is no worrying about the young players turning on him and they are focused on winning. Cousins issues in the past have been winning and offensive inclusion based. If he came to Boston, one would assume he wouldn’t see a shortage of neither.

Finally, George Karl is a Hall of Fame basketball coach but he has alienated more than a few NBA stars in his time. He’s an old school guy who makes his stars feel like they are being treated poorly and don’t connect. Stevens is new school, and the kids love his class.

Playing in Sacramento has to be draining. A franchise that has been on a rollercoaster ride since the days of Peja, C-Webb, and White Chocolate. Cousins has shouldered the load on a nightly basis with little to no help only to have the Western Conference playoffs 10-games away on any given year. I think we would all be a little frustrated by this. However, this deal gives DMC a chance to be a perennial playoff performer with an opportunity to advance to the Eastern Conference finals with even a modest group around him.

Not to mention, if Cousins decided to slack and bitch, the Celtics faithful will let him hear it. Let’s not confuse anything here. The young vet wants to win and this is by far his best chance to do so with a crowd, coach, and franchise behind him.

3. Luck of the Irish

Last but not least, the ransom paid for the new King in Boston? You guessed it, the Nets' pick, which is destined to be in the top-10 slots in the 2016 NBA draft. Yes, it seems like the pick will have the potential to be worth top-5 in ping-pong ball value. And yes, it could be the top pick of the draft. But as a Celtics fan, do you really think the C's are going to get that lucky?

In the Celtics entire history they have picked first in the draft one time and since the installation of the draft lottery the C's have picked in the top-three on only two occasions. To put it quite simply, if you are waiting for Ainge to get the top pick (or even a top-3 pick) in the draft, keep waiting.

There are always high expectations when it comes to Boston's draft luck, which is the worst case scenario. If the lottery says they should get top-three, they could pick fifth. If it has them going number one overall, look for the pick to be third…at best.

Moral of the story?

GET THE SURE THING!

In the end, the trade for DeMarcus Cousins is a risk, but this guy thinks playing the lottery is a lot more riskier than most realize.