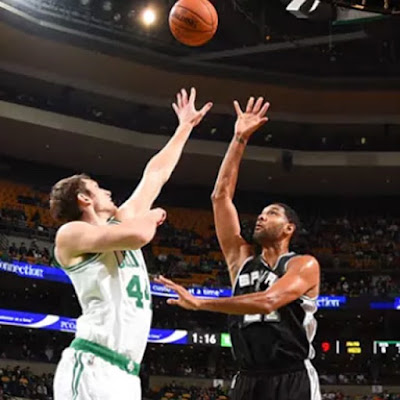 As the Celtics gear up for the San Antonio Spurs at TD Garden, Celtics coach Brad Stevens addressed how he plans on keeping the starting lineup in tact, what went wrong against the Raptors on Friday and how important it will be to defend the Spurs in the post.

Celtics head coach also broke down how the Spurs run their offense and how they're so successful against their opponents.


"They're posting up more (Spurs) but they're still playing the same way," said coach Stevens. "I think the biggest thing is whether it's pick-and-roll or the post up, it starts their cutting and movement game and then they have all kinds of spacing and savvy around them so they slice you up if you're not careful. Obviously, the back cuts are a big deal, basket cuts are a big deal; those are things that we're going to have to be a lot better at today than we were on Friday night."

Stevens also discussed how the Celtics defense needs to improve, and what he thought was the biggest problem his team faced Friday night against the Raptors. The problems the Celtics faced on Friday night will be much similar to what the C's will see today against San Antonio.


"The best example of us coming up short on the defensive end were careless points the other night," coach Stevens said. "You got a couple of back cuts that you need to take away, you got four transition/offensive rebound threes that are plays we gotta to get better at and we had a couple of breakdowns when were in the half court on pick-and-rolls but other than that I thought the half court was okay"