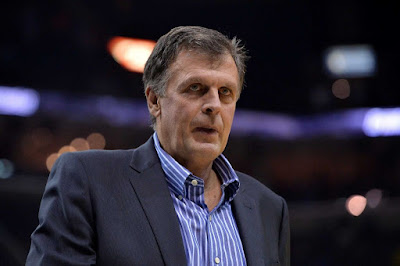 The Houston Rockets surprisingly fired their head coach Kevin McHale on Wednesday, just 11 games into the NBA season. Celtics coach Brad Stevens expressed his feelings on Houston's decision to fire McHale last night before his game against the Dallas Mavericks.

"I don't agree with the firing, but it's not my choice to make" Stevens said. "I think Kevin is a great coach. Kevin has been great to me. Kevin is obviously a great Celtic. People love him everywhere they've been. Everybody that you hear from loves working with him, loves being around him, so to me, from the outside looking in, it looks like 11 games in making a rash decision, but that's not my call."

Just last spring, McHale nearly led the Rockets to the NBA Finals. He fell three games short in the Western Conference Finals and won 54 games or more in the last two seasons as coach of the Rockets.

Stevens wasn't the only coach who was disappointed to hear about McHale's firing. Dallas Mavericks coach Rick Carlisle also questioned Houston's decision last night at TD Garden before taking on the Celtics.


"I was extremely surprised McHale was let go," Carlisle told reporters. "Here's a guy who has such amazing integrity as a person. You can watch him on the sidelines, and he walks with a limp because of the sacrifices he made to become one of the greatest champions in history. He loves and respects the game so much."

Carlisle, who was a teammate of McHale's on the 1986 NBA champion Celtics team, also added that he think McHale will be an NBA coach again in the near future.


"It's surprising with something like this happens -- shocking -- but he's going to be fine," Carlisle said. "He's going to get a chance to get some rest here, probably jump on TV and have a blast doing that, and then there will be a lot of teams wanting to hire him, because he did a fantastic job in Houston. When you look at their team over the last few years, their roster was constantly in flux, and he just did an amazing job putting that together and bringing those guys back from down 3-1 in the semifinals. That's a guy with some great coaching credentials, and his other championship credentials really go without saying."