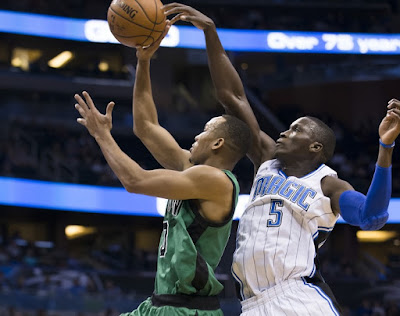 The Celtics are off to a bad start on their five-game road trip.

After beating up the Washington Wizards on Friday, the Celtics received a beating of their own at Orlando as the Magic cruised to a 110-91 win.

Behind Isaiah Thomas (20 points) and Avery Bradley (17 points), the Celtics shot 41 percent from the field but couldn't slow the Magic down in the post. Orlando converted 17 offensive rebounds to 26 second-chance points.

Jae Crowder (12 points) talked about how well Orlando rebounded against the Celtics and how his teammates need to hold themselves accountable.

"It's not just one guy, all five guys on the court were lacking," Crowder said. "They came up with every loose ball and every offensive rebound they got, they scored on or it seemed. We have to get better on that." [Associated press]

Although Jared Sullinger reached double digits in rebounds (11) for the third game in a row, the Magic's rebounding along with their bench production changed the complexity of the game in the third quarter. Oladipo's scoring and Andrew Nicholson's 14 points and eight rebounds helped the Magic take an 84-67 third quarter lead into the fourth. Orlando's bench alone complied 56 points and 25.

"When we rebound, we're pretty good, but tonight we made it hard on ourselves," coach Stevens said. "Probably more apt, they made it hard on us. We gave up too many plays at the rim. These guys (Magic) are just good." [Associated press]

The Celtics managed to trim Orlando's lead to 12 in the fourth quarter behind Thomas' six straight points but there wasn't nearly enough time for a comeback.

But the C's will have very little time to dwell on their loss to the Magic. They will head south to Miami to face the Heat on Monday.

The Celtics are 0-7 on the season when their opponents score 100 or more points.