Smart out 2-3 weeks, big loss for the Celtics 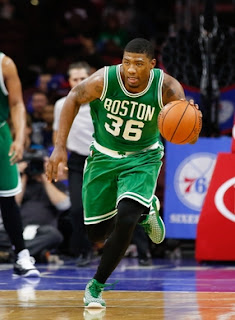 The Celtics are going to miss Marcus Smart.

Before facing the Brooklyn Nets on Sunday, Celtics coach Brad Stevens said that Smart will be out for at least two weeks with a lower left leg injury.

After undergoing an MRI on Saturday, the Celtics guard was initially expected to miss the team's road trip to Brooklyn and Atlanta. But for cautionary reasons, the team has decided to sit Smart for what could be close a month because of how rare his injury is.


"They've actually asked for second opinions on it, because it's a really unique injury. But it's not a long-term thing, and it's not a huge issue," Stevens said. "They just want to make sure that everything is fully healed before he comes back. [Boston Globe]

"It could be a couple weeks, or it could be longer than that," Stevens said. "Hopefully it gets a lot better sooner, because obviously he's a big loss for us."

Smart's injury is a subluxation of the proximal tibiofibular joint in his left knee. There's isn't a fracture in the tibia (large shin bone) or fibula (little bone on the outside of the leg) but rather a dislocation where the two bones meet.

Smart suffered the injury on Friday night at TD Garden when he collided with Nets forward Thomas Robinson.

This is a huge loss for the Celtics.

Smart is averaging 9.8 points, 3.8 rebounds, 3.2 assists and 1.8 steals this season. But what's often overlooked is his impact on the defensive end. After Friday night's win over Brooklyn, the Celtics were among the best in the defensive rating category.

However, Sunday night the Nets scored 59 points in the first half on 55.8 percent shooting. It was Brooklyn best half of the season. And when the Celtics shaved a 22-point lead down to just four, Nets guard Jarrett Jack scored 13 fourth quarter points to push Brooklyn ahead. Behind Avery Bradley and Isaiah Thomas' 27-point performances, the Celtics' offense found its momentum against the Nets but without Smart -- Jack was able to get anywhere he wanted against the Celtics.

The Celtics are going to miss Smart at Atlanta. All-star guard Jeff Teague and the Hawks will look to avenge their November 13 loss to the Celtics and without Smart, it's going to be challenging for the C's to slow down Atlanta's offense.

Coach Stevens needs someone to step up defensively. He'll turn to Jonas Jerebko, rookies Terry Rozier or R.J. Hunter to help defend the Hawks back court but none of them will match Smart's intensity. They'll only be a temporary solution for a problem that will continue to grow in the next coming weeks.