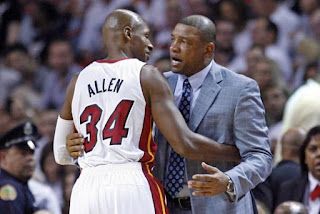 Based on a one game evaluation, I think we can all agree Ray Allen may have made the right decision to bring his talents to South Beach. Last nights 120-107 loss to the hands of Allen, Lebron James and the Miami Heat certainly wasn't what the Boston Celtics had in mind to start out the season.

On a night where they watched Miami hoist the NBA Champions banner, the C's then went out and were completely out played. The Celtics had no answer for Lebron, couldn't defend in transition, and did not get the production from their bench that was talked about so much coming into the night.

Here's my five points you should take away from last nights game:

1. The Celtics Defense needs to improve.


Normally, if you quickly look at the box score and see that the Celtics scored 107 points, it would be safe to assume they won the game, considering their reputation on defense. Last night, it was a different story. They allowed 31 points in each of the first three quarters, which is absolutely unheard of for the Doc Rivers led Celtics. We saw their inability to defend the pick and roll all throughout the preseason. Most thought, including me, they would fix that before the regular season. Last night however, it was not only the pick and roll they had trouble slowing down it was just an outright sloppy performance from the defense.
2. Did Jeff Green forget there was a game last night?


Not only was last night the debut for Allen in a Heat uniform, it was supposed to be the unveiling of the potent combination of bench players the Celtics acquired in the off season. Jason Terry, Jeff Green, and Jared Sullinger were basically invisible the entire night. This was especially disappointing from Jeff Green who many had high hopes for coming into the season after a stellar preseason.
Green looked hesitant on the offensive end and lost on the defensive end. Yes, to his credit he was dealing with Lebron James who looked unstoppable last night, but in all it was a very disappointing showing for Green.  Only scoring three points in 23 minutes. That's not gonna cut it Jeff. 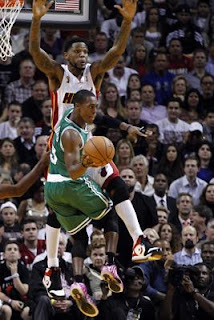 ajon Rondo: The good, the bad, and the ugly.


We saw all sides of Rajon Rondo last night. His actual play was really good last night. He ended the game with 20 points, 13 assists, and 7 rebounds. He was also key in the run the Celtics made in the fourth quarter, he was constantly attacking the rim and getting his floater which is great news for the Celtics. The bad was his awful technical foul that granted was a missed call by the ref who was right there, but it took the wind out of the sails of the Celtics when trying to make a comeback. The ugly, was his pay back on Wade at the end of the game. The hard foul was late, uncalled for, and just goes to show that Rondo still has those maturity issues that have haunted him his entire career.

4. Lebron James is a lock for MVP.


Last night James played like it was game 6 in the Eastern Conference Finals. 26 points in 29 minutes, and if he didn't leave the fourth with cramps he probably would have dropped 40, and the Celtics would not have been in the game at the end.
Watch out NBA, if James is going to play like this all year long its going to be a pretty easy ride for the Heat back to repeating.

Could this have been a one hit wonder? We shall see but bottom line he was key last night in the fourth quarter knocking down jumpers and driving to the hole. He will be a great last minute pick up for the C's to back up Rondo if he is able to shoot like that.
Posted by SeanDutra at 4:06 PM
Email ThisBlogThis!Share to TwitterShare to FacebookShare to Pinterest