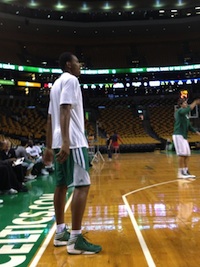 Coach Doc Rivers has expressed throughout the preseason that he wants to speed up the team's pace offensively for the upcoming regular season. The Celtics increased their speed Wednesday in practice by adding two players: Leandro Barbosa and Chris Wilcox.

It was Barbosa's first official practice since joining the Celtics and Wilcox's first practice since being sidelined with a back injury earlier this month. Both players will be vital pieces for the second unit. They'll help jump start the transition offense for the bench, alongside Jeff Green and Jason Terry.

Barbosa is still getting used to things in Boston but is very much looking forward to the upcoming season with his new team.


"I have to get to know the plays, the defense, and all the things they've been doing in training camp," Barbosa said. "It was OK, the coaches give me a lot of attention, they help me a lot. I wasn't playing that much back in Brazil but I think I'm OK so far. I will pick it up little by little."

Being a Celtic, has reminded Barbosa of his days in Phoenix because of the team's versatility.


"I was at the Phoenix Suns a couple of years ago and I think we had a couple weapons like they have here. So it's just fun to be here and see how many weapons we have together. It will be hard for Doc to make the combinations on the court and positions. It's a great team and I think everybody is trying to give a good effort so we can go to the championship." 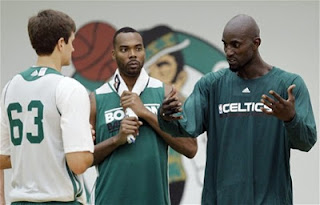 Wilcox traveled to Europe with the Celtics but didn't play a game. He's been rehabbing his back throughout the preseason, and is now ready to start the regular season.


"It's the first day, so I didn't expect too much, back feels great, everything felt great," Wilcox said. "So hopefully [it'll] keep up. I'm coming from scratch right now, so everything I do is trying to improve, trying to get better. I'm just out here working and feeling out where I need to be and getting back in the flow of things."

With the additions of Barbosa and Wilcox, the Celtics undoubtedly have the most versatile bench in the NBA. The only question is: How will Doc use it? With a plethora of combinations, it'll be interesting to see how he'll mix the reserves with the starters. I for one, would love to see a lineup of Barbosa, Wilcox, Pierce and Green on the wings and Sullinger as the 4. That would be my ideal small-ball lineup for the Celtics. Or, the Rondo-Terry backcourt along with Wilcox, Green and Pierce. Or, a frontcourt of Wilcox, Lee and Sullinger alongside Rondo and Terry. Or! Alright, I could do this for hours, but I digress. In other words, Doc has his hands full. But that's a problem I'm sure he doesn't mind having.

Posted by Josue Pavon at 3:12 PM
Email ThisBlogThis!Share to TwitterShare to FacebookShare to Pinterest