The Celtics snapped a three game losing streak by defeating the Brooklyn Nets last night, 115-85. Celtics opened the game with two forced turnovers and scored nine straight points in a minute and a half and never looked back. In Celtics' first visit to the new Barclay Arena, they shot 57 percent from the floor and knocked in 11 out of 19 shots from behind the arc in their best performance of the preseason.

Celtics set the tone defensively. They played with a sense of urgency against the Nets by forcing turnovers and infiltrating the passing lanes.


"We talked about it before the game, we had to show up defensively," coach Doc Rivers said. "Tonight, that's us, that's our defense. We're trying to convince them, with all the scoring we have, if we get stops we're going to score and score in transition more. We're going to score in a lot of different ways and you could see that tonight."

Courtney Lee played his best game since joining the Celtics. He stole the ball four times, scored 18 points and led most of the fast breaks for the Celtics. Lee's performance last night is the perfect example of Doc's method of defense leading to easy buckets. 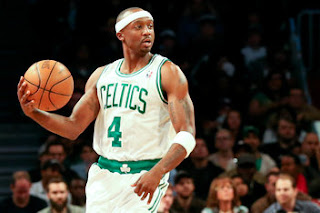 Six players scored in double figures for the Celtics. Jason Terry made all five of his three-point attempts for 15 points and Pierce made all four of his three-point attempts and finished the game with 18 points. Pierce temporarily left the game in the second quarter after rolling his ankle stepping on the foot of Gerald Wallace after a made three-pointer. He got his ankle taped and returned in the second half. Although coach Rivers enjoyed the win, he knows there's still plenty of work to be done.


"I don't know who we are yet because of our combinations. I like our team, but it's just going to take time. I hope we get off great but I'm also realistic enough to know we're going to be so far from our best basketball on opening night until later because we have the ability to play a lot of different combinations. And even though you can do them, they've got to work. And it takes time for chemistry and timing," Rivers said.

One thing that has been overlooked about Rivers' team is their three-point shooting ability. Celtics have four solid three-point shooters in Terry, Lee, Green, and recently added Leandro Barbosa. If Rivers can master the fast break style with his guys, they'll be able to outscore a lot of teams in the league strictly off of their solid defense. But this is all going to take time. It's still October and they're just getting started.


Josue Pavon
Posted by Josue Pavon at 2:31 PM
Email ThisBlogThis!Share to TwitterShare to FacebookShare to Pinterest