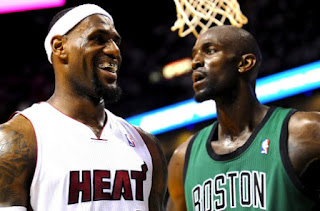 A lot has been made about the Celtics gearing up for the Miami Heat coming into this season. The Heat are the NBA champions, and obviously the road to Eastern Conference supremacy will ultimately go through Lebron and company. However, the Celtics will have to match-up with divisional foes all year  in the much improved Atlantic Division.


The Celtics, New York Knicks, Brooklyn Nets, Toronto Raptors, and Philadelphia 76er's make up arguably the best division in the NBA. Every team in the division has made off season moves to challenge for not only the division title but to potentially be championship contenders. It is a far cry from past years when the Atlantic Division was really a laughing stock, with the Nets, Knicks, 76er's and Raptors finishing under .500.

When the division was so weak, Doc Rivers was able to get his Celtics team to dominate these teams and have won the Atlantic Division six out of the eight years he has been with the team. However, this seasons divisional competition will by far be the toughest the Doc and the Celtics will have to deal with.

So how will the Celtics fare? Lets break it down team by team. 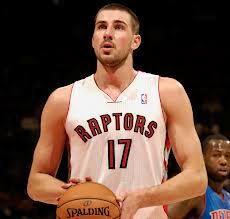 The 100-1 odds to win the division is probably too high. The ceiling for the Toronto Raptors is to some how scrap there way through the regular season and grab the 8th spot in the Eastern Conference. They have added a lot of youth to an already young team.  Demar Derozan has developed over the past few years in to an up and coming prospect. but to think he is ready to lead his team to the playoffs may be a few years away.

The most interesting thing to watch for this year will be the development of there 2010 draft pick Jonas Valanciunas.  He will make his debut for the Raptors after spending another year in Europe. The seven footer from Lithuania has a lot riding on him. In Toronto, he is all ready being called the savior for a franchise that has been marred by irrelevancy.

The Celtics cant overlook this youthful bunch. If Toronto is committed to running the floor  against the Celtics, it could cause some issues for the Green. Realistically, the Raptors are truly 3-4 years away from being any type of legitimate contender, but they are definitely improving slowly but surely. Look for the Celtics to dominate Toronto this year, because the Raptors just ain't good enough to win.

All the talk of the Nets finally becoming a contender to win the East, I think is a little bit overdone.  Re-signing Deron Williams was huge, but they have made a few questionable decisions this off season that may handicap them in the coming years. 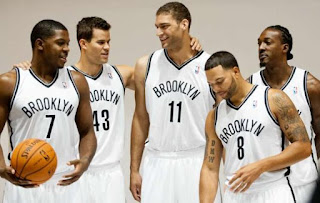 First off, trading for Joe Johnson and his ridiculously inflated contract was done for no other reason but to make a splash for their new home. Johnson may be one of the most overrated players in the game. Maybe teaming him up with Williams will rejuvenate his slowly declining career, but he will never be worth the money that the front office is investing in him. Also can someone explain to me how is Brook Lopez, who has proved nothing but he is injury prone and cannot rebound, worth a max deal??

Regardless of there questionable off season additions the Nets are a better team than years past. They are going to be fun to watch and will give the Celtics a run for their money defending their division title. However, the Celtics match up extremely well on paper with the Nets. The Nets have no real answer for Garnett and Pierce has proven time and time again that Gerald Wallace has no chance of guarding him. Also depth wise the Celtics have a clear advantage. 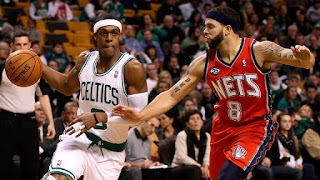 This could be the start of an epic rivalry at the point guard position. Rajon Rondo vs Deron Williams has all the makings of a must watch match-up. These two have been arguably the best point guard in the league for stints over recent years. The battle between these two has been overlooked over the past years because, well frankly, the Nets have sucked ass. Now that both teams will be battling for a division crown we should be able to enjoy the two stars going at it 6 times a year.

The Knicks were very hot and cold last season, and this year will most likely be the same streaky team. There are questions that surround this Knick team that have been unanswered since the arrival of Carmelo Anthony to The Big Apple. It has yet to be seen if Carmelo can play in a system that doesn't revolve around him every single possession. That will be the biggest thing that Coach Mike Woodson will have to prove early this year. Is it possible to motivate one of the biggest divas in the league to sacrifice his stats for the greater good of the team? We shall see... 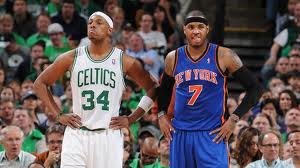 Then there is the GM James Dolan. He thought that bringing in probably the oldest free agent class of all time of Jason Kidd, Rasheed Wallace, and Marcus Camby was a good idea. He also couldn't let little Jeremy Lin hurt his feelings and actually use the Houston offer as leverage to negotiate a contract; even after he promised he would do everything he could to keep Lin in NY.  Even with his mind boggling moves, the Knicks should win a few games this year in spite on their GM.

The Celtics and Knicks have been the two strongest teams in the division in the past two years. They have played memorable games with most of the time the Celtics getting the best of New York. Here's basically what it comes down to, the Knicks need Melo to be a TEAM player and play incredible defense, which they are more than capable of doing, to have a chance to take the division title from the Celtics.

If they are playing with all cylinders firing, they are a tough match up for the Celtics, but they C's have them beat in one department, and that's who is running the point. They will need to have an answer for Rondo, which could be Iman Shumpert, who is probably their best perimeter defender. Other than that look for Rondo to single handily give Knicks fans nightmares throughout the regular season, and playoffs if the stars align. 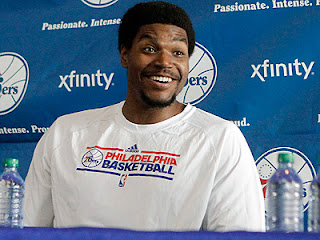 Well, Philly went out this off season and acquired Andrew Bynum, who is hands down the best center in the East. He is also hands down the most injury prone player in the Eastern Conference. So they traded their best player in Andre Iguodala, and watched Lou Williams go in free agency to put all their eggs in Bynum's basket just to find out he's not ready to go to start the season. Tough pill to swallow if you are Doug Collins.

Should the 76er's stay healthy however they have a legitimate chance of knocking the C's off from the top of the Atlantic Division. We all saw what type of match up problems they can create against the Celtics when they pushed the Green to game seven in the Eastern Conference Semi's last year.  The Celtics were able to address the glaring reason the 76er's were able to push them to game seven last year, by adding depth and bench scoring.

If everything goes there way they do have a lot going for them. Good coach, great bigs, young and improving point guard, and experience in big games after last post season. The bottom line though, they go as far as Bynum can take them on 1 1/2 knees.

Posted by SeanDutra at 10:30 PM
Email ThisBlogThis!Share to TwitterShare to FacebookShare to Pinterest