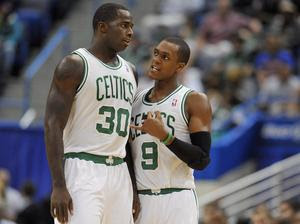 Due to the immediate impact of Jared Sullinger, there has been a debate among Celtics fans about if the rookie should start in place of Brandon Bass this season.

Sullinger has raised eye brows because of his ability to rebound the ball and score in the paint. When asked about the potential switch, Bass didn't seemed phased by it. A trust has been instilled in the coaching and decision-making of Doc Rivers. Bass, who just signed a three-year contract extension, and is in a position battle with rookie Jared Sullinger, said it best:

"Man, I'm not going to get into all that stuff about starting, not starting," Bass told CSNNE.com. That's Doc [Rivers'] call. What he says, that's how it goes."

Starting Sullinger over Bass potentially disrupts the chemistry of the starting lineup. It's no coincidence that Bass scores best when Rondo is out there on the court with him. Although Sullinger's rebounding ability was impressive throughout the preseason, those numbers will not be the same if he's a starter in the NBA. Sullinger hasn't played against the best front courts in the league yet. But Brandon has. 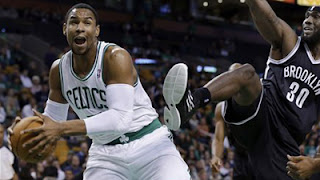 Sullinger would shine best off the bench and contribute with the rest of starters in situations when Garnett needs rest. Sullinger, Bass and Pierce is a strong frontcourt. And what I like about it best? It doesn't involve Garnett. Celtics couldn't put together a lineup last season that included a rebounder (Sullinger) and a pick-and-pop forward (Bass) with Garnett on the bench. But they can now.

Also, it will be no surprise if we see Bass help guard LeBron James like he did during last year's series. In that time, it was Bass who matched up well against James. But such a move would be a tough for Sullinger, a rookie playing in his first regular season game.

Although he should begin the season as a reserve, it wouldn't shock me if he ends up stealing a starting job by the end of the season. Sullinger will be a top rookie in this league whether he starts or not, and his basketball IQ will only get better.

Earlier this week, it was reported that Doc will be using three starting lineups throughout the season.

Rivers says he will decide which lineup to use depending on the opponent. I like the idea of seeing all three lineups but think Lineup #1 will be best, and the most commonly used starting five. I love the combination of Lee and Rondo in the backcourt. Lee really gells with the starting group, and has been a great receiver for Rondo in the fast break.

Doc will be making decisions like these all season. And they will only get tougher for the coach. Next big decision for Doc is already coming up in a couple of months; 'Lee or Bradley?'

Posted by Josue Pavon at 10:21 PM
Email ThisBlogThis!Share to TwitterShare to FacebookShare to Pinterest