Jason Terry is No Allen, and He's Not Trying To Be 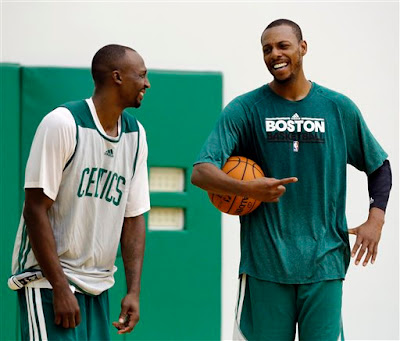 With much anticipation mounting as the NBA season opener looms just a month from today, fans and media around the world wait on the edge of their seats to see how this season will play out. Teams in both conferences have made major moves in hopes of defeating the Miami Heat for their coveted NBA Championship trophy. The Lakers exported Andrew Bynum and imported Steve Nash and Dwight Howard. The Knicks picked off some the best aging talent in the league in hopes that experience will provide  the needed push for league dominance.

In the city of Boston, the arrival of Jason "The Jet" Terry could be just as important as any other offseason pickup. With Ray Allen departing to Miami, Celtics look to Terry for scoring this season. Terry signed with the Celtics in July after playing for the Mavericks where he helped defeat Miami for the championship in 2011 and was named the 6th Man of the Year in 2009. He brings with him an experienced game with a sweet shooting stroke that can be deadly anywhere on the court, especially late in games, that's where he shines.

Sounds familiar, doesn't it? While Ray Allen might be lurking in the corner or coming off a screen in late-game situations, Terry has been known to take defenders off the dribble with the ever present threat of a quick pull up or a sharp pass to an open man. While both players can hit the three, Allen obviously with more accuracy, Terry's athleticism allows more versatility in play calling and in offensive tactics like running the court with Rajon Rondo. Both are quite average defenders averaging just a steal per game, respectively.

When asked if he will have the same impact as Ray, Terry was quick to answer,


"No, we're two different players and hopefully, I'll bring something that Ray didn't and some other things that he did." Jason also showed the deserved respect for the former Celtic, adding, "Obviously, Ray was a great player for this franchise for years, brought them a championship in '08. But, again, our games are totally different. He's 6-5 and I'm 6-2, but I am 'The Jet' and I like to fly so we'll see what happens."

Perhaps another difference under the collective, critical microscope is that of Terry's acceptance of the 6th man role and any other role that Doc may need him to fill. With reports that Allen's departure was tied to his unhappiness with his mid-season demotion to the bench in favor of Avery Bradley, Terry's history of coming off the bench is a comfort for those afraid of further locker room reports of abrasive personalities. He certainly understands what he is capable of doing for the Celtics, devoid of Allen's past contributions.


"A lot of those comparisons will be thrown out there but we're two totally different players. For me, my job, it doesn't change. I'll be thrust into the sixth man role. But hey, I'm on one of the best. It is what it is, and I take pride in it. It's something every team needs, that spark, that energy off the bench and that's what I'm here to do. Anything other than that, I won't be doing my job," Terry lamented last Friday during Media Day.

Celtics fans can rest assured that Jason Terry is going to do what he has always done in the NBA; score from all over the floor, provide a shot of energy and mold himself into exactly what the team needs. Sure some green teamers will miss Ray-Ray and his poetic stroke but on a team of strong leaders like Garnett and Rondo, Jason Terry may be a more integral member of the Celtics' chase for banner 18.


-Sean Heenehan
Posted by Josue Pavon at 9:08 PM
Email ThisBlogThis!Share to TwitterShare to FacebookShare to Pinterest