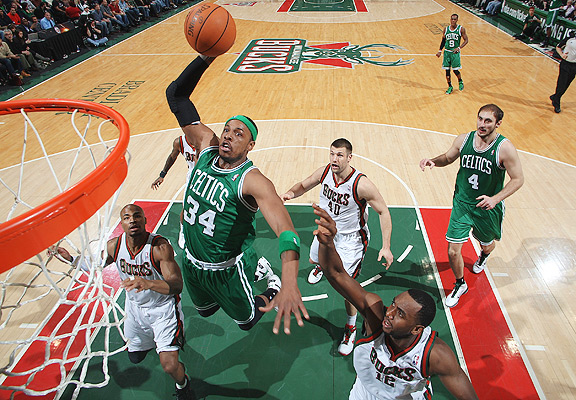 No introduction really necessary for the Celtics captain Paul Pierce, but I'll give you one anyways.

Pierce has been the model of consistency for a franchise that has seen its ups and downs over his 15 year career in Green.  'The Truth', as he is known to his Boston Brethren, has been a mainstay for the Celtics year in and year out. On the offensive end he is a magician, not blessed with quickness or extreme athletic ability, but almost methodically is able to score at will using his size, strength, and natural basketball instincts.

Even though Pierce is no doubt beloved in Boston, he hasn't really gotten the recognition he deserves over his illustrious career nationally. Granted he is a perennial all star selection, but there was a time that he should have been mentioned in the same breath as the elite superstars in the league and wasn't due to the Celtics struggling to be relevant in the prime of  his career.
Could you imagine if Pierce had someone other than Antoine Walker to play alongside how different his career would be viewed? Either way, on the Mt. Rushmore of Celtic greats, Pierce has proven he belongs.

Pierce was drafted out of Kansas in the 1998 draft and was picked 10th overall. His first season was the infamous lockout season of 1998-1999, however he was able to make an impact immediately and hasn't looked back.

Pierce has averaged 22.0 ppg over his career, good enough to pass Larry Bird last season as the second leading scorer in Celtics history. He only trails John Havlicek, by around 3,800 points. If he plays another three years he has a fighters chance of setting the record. We'll see what type of dent he makes this season. 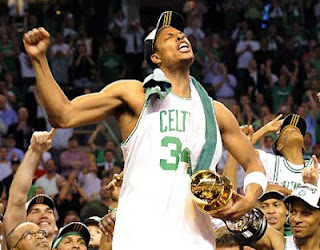 Probably since the addition of Kevin Garnett and Ray Allen in 2008, there hasn't been a season like this one where we can expect a diminishing role for the Celtics captain.

Now Pierce still will be the Celtics go-to-guy when it matters. He showed last year and this preseason that he can still take over any game at anytime, but look for Pierce's minutes to lessen this year compared to previous seasons. The Celtics have brought in a lot of depth, mostly with bigs and combo guards, but watch out for Jeff Green to steal some minutes from the truth.

Green has surged this preseason and has made his case to be the number one option off the bench. This is probably a good thing for an aging Paul Pierce. He will be able to conserve his energy over the length of a grueling 82 game season and really be in top form for the playoffs.

That being said, I still expect Pierce to lead the team in scoring and be there number one guy in the clutch.
The man is a juggernaut and I don't expect a significant drop off but his battle with Green  will be interesting to keep an eye on this year. I'm sure we will see a similar performance of last year hovering right around 19-6-5.  If the Celtics are going to make a deep run they will do so with Pierce at the forefront of the charge.


-Sean Dutra
Get at me on twitter @seandutra
Posted by SeanDutra at 10:32 PM
Email ThisBlogThis!Share to TwitterShare to FacebookShare to Pinterest