Why Celtics Will be taking Nets Seriously This Season 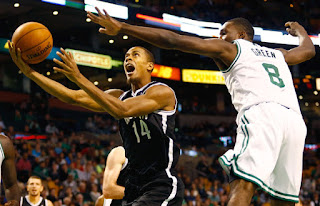 Following a 97-96 defeat against the Nets, in a game where all of Brooklyn's starters sat out, Celtics' Kevin Garnett knows not to take a team such as the Nets too lightly this season.


"With Joe Johnson and with Deron (Williams) and everybody, they're going to be a force to be reckoned with," Kevin Garnett said Wednesday, following Boston's loss to Brooklyn in Tuesday's preseason game. "They're nothing like last year. They're going to be strong."

It's surprising that the Celtics haven't laughed off the thought of the Nets being competitive this season. For the past five season the Nets have by far had the worst record out the Atlantic Division. But this year, with the addition of Joe Johnson and Gerald Wallace, even captain Paul Pierce knows not to overlook any team in the division.


"They're a team that's going to be right there at the end of the day in the Atlantic Division," Pierce said. "This is a deep division, one of the deepest I've seen since I've been a Celtic. So it will be a challenge for us."

Along with the Nets, Philadelphia had a busy offseason as well. In a blockbuster deal, the 76ers landed center Andrew Bynum and guard Jason Richardson. Bynum, one of the best centers in the league (according to Shaq the best center who's followed by Brook Lopez). They also added shooter Nick Young and traded for swingman Dorell Wright.


"We would have preferred the way it used to be in our division, that was terrific," said Doc Rivers. "It's a hard division now. Not just the Nets, not just the Knicks, (but) Philadelphia with Andrew Bynum. It's just going to be a tough division."

Andray Blatche led the way for the Nets Tuesday night, scoring 23 points and grabbing nine boards. Mirza Teletovic pitched in with 18 points as the Nets stole one in the Garden. Celtics' Pierce was on fire for Boston, he scored 29 points in 27 minutes and lit it up from behind the arc knocking in six out of eight. Celtics held their own for most of the game but like all of other losses in the preseason, they lost it in the fourth quarter.

The Celtics will get their chance for payback in a rematch against Brooklyn tonight at the Barclay Center in a nationally televised game. After sitting his starters Tuesday night, Nets coach Avery Johnson plans to use his full rotation. Celtics will play in the new arena for the first time tonight, against a team that has finally earned their attention.

Posted by Josue Pavon at 2:32 PM
Email ThisBlogThis!Share to TwitterShare to FacebookShare to Pinterest