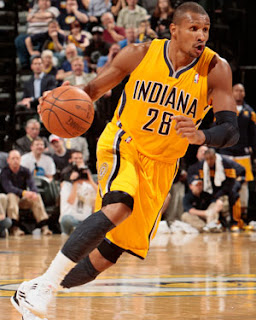 The Celtics have filled the only hole in their roster, by adding veteran guard Leandro Barbosa. Behind Rajon Rondo, the Celtics didn't have a point guard that could move the ball down the court. Now, they do. Barbosa has agreed to a one-year contract for the veteran minimum.

Although he is mostly seen as a shoot-first type of guard, he will give the Celtics an option to bring the ball up the floor for the second unit. The "Brazilian Blur" is a great ball handler who can push the ball at a fast tempo and score. With Barbosa handling the point guard duties, this frees Jason Terry to play the two-guard and to concentrate on his scoring only.

Celtics also receive another three-point shooter off the bench to go along with Terry and Green. He isn't the ideal backup point guard (he's a combo guard), but is someone who won't struggle leading a bench crew. Barbosa will be in a position where he doesn't necessarily have to be instant offense, but can score in bunches when needed.

Barbosa split time last season playing for the Raptors and the Pacers. He played in 22 games for Indiana and played well in the playoffs for them. He averaged nine points and 1.5 assists a game. Celtics finally have the veteran they wanted to backup Rondo this season.

Posted by Josue Pavon at 5:36 PM
Email ThisBlogThis!Share to TwitterShare to FacebookShare to Pinterest