NBA Cracks Down on the Flop

Somewhere Jeff Van Gundy is smiling. If you've watched any nationally televised game on either ESPN or ABC, you would have heard Van Gundy's rants about how 'flopping' is ruining the NBA game.

The NBA Competition Committee apparently is in agreement with him, as today the league rolled out their Anti-Flopping Creed. Penalties and fines will be now given out to players who 'flopped' to trick the ref's into calling a foul on an opposing player.  Upon video review the NBA Board of Governor's will deal out fines according to the players recent history of flopping.

They way it works is that the NBA will keep track of the amount of 'Flop Violations' you commit during the season. First offense is a warning, second a fine of Five G's, and it continues to rise until your fifth infraction you're docked $30,000. Go past five and then your subject to a further penalty which may involve a suspension. 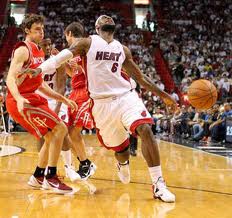 Now don't get me wrong, I am against the flop in the NBA.  Keeping the Ginobili's, Harden's, and Varejao's of the world in check is a huge step in the right direction for the league. The new rule will certainly make players aware that there is a consequence of flopping, but I still have a few problems with the rule change.

All this rule change does, is give David Stern a way to protect his referees, which by the way are the worst officials in the four major sports. (Replacement NFL Officials aside; of course.) If the NBA had any faith in its officials they would give them the opportunity to just call a flop on a particular play. Give the guy a tech, and then guess what... HES NOT GOING TO FLOP AGAIN.

Yet, they cant do this because they have AWFUL officials.  On top of their PURE INABILITY TO CALL A GAME, they are scrutinized every year in the playoffs about what crew is calling a particular game. If Stern gave the refs another ounce of power that could swing a potential game or series, cries would be heard  from every US city not named Miami or Lakerland that "THE GAME IS FIXED!" 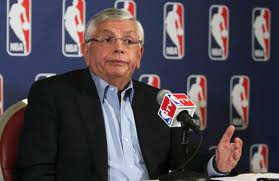 And its not absurd to think that the supposedly "Best Basketball Officials in the World" could actually go through training and have some sort of ability to see an obvious flop. In the NHL, the refs do have the ability to call a 'dive', and you know what its not 100 percent accurate, but at least if they catch a guy on an obvious dive they are able to send him to the box for a while. And if fact, directly impact the game the flop occurs in.

However Stern and the Board of Governor's idea on getting rid of a problem is fining their players what is in essence, pocket change. So now player don't have to stop flopping, but just save your five flops for the playoffs, when the games matter the most.

So a big thanks to Tim Donaghy for fixing games, and also to  David Stern for not cleaning house after the fact. There actions make this issue unlikely to ever be fully resolved.

On a lighter note here is a link to all you GIF. fans to the top 25 flops in GIF form

- Sean Dutra
Get at me on Twitter @seandutra
Posted by SeanDutra at 4:55 PM
Email ThisBlogThis!Share to TwitterShare to FacebookShare to Pinterest