Doc Rivers: On The Run 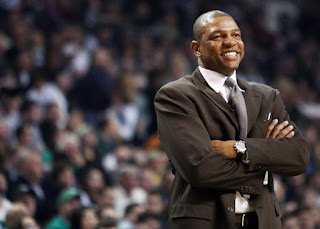 The Celtics offense last year has elements of speed, usually by the feet of Rajon Rondo and his self-outlets but Doc Rivers and his mastermind point guard will be attacking the length of the gym a lore more this upcoming season.

With the additions of Courtney Lee, Jason Terry and a health Jeff Green, the Celtics should be able to get into the alleys and increase the pace of the game.

"We need to increase our pace. We turned the ball over too much last year. I thought more than anything that hurt our offense. When you look at our efficiency, when we actually got a show up at the basket we were pretty good. I would like to increase our pace of play a little bit. I just think we're a different team."

Jeff Green's versatility in playing at different spots on the floor is especially important in Doc's evolving offense that will help the C's compete in the every-competitive Eastern Conference. Green can seamlessly work from the 2 spot (which I do not think he will a lot of with Courtney Lee in town) to the 3 and 4 spot where I think Doc will use him the most.

Speedster Jason Terry's game is in tune with this philosophy, as he can get out and run with and without the ball and can be a deadly stop and pop shooting in a fast break situation. Other players like Brandon Bass and Chris Wilcox can also run the floor and be tough to stop once on a roll, not to mention pull in some defensive rebounds to get it flowing and offensive boards to clean up the missed shots.

Sure, Danny Ainge only added a few pieces for Doc to increase the speed, but Rivers has been working towards this point.


"You just keep trying to push it and talk about it," said Rivers. "We've had guys that have really wanted to run, and I think we have more of those guys now."

There is no doubt, however that the man leading the charge is Rajon Rondo, arguably the best point guard in the game. Rondo's knack for peeling rebounds off the glass and going coast-to-coast has always given the Celtics a spark, but not without some miscues along the way. Turning the ball, poor shot selection and wasted possessions affected the squad throughout the season; consequences of pushing the ball without numbers or without a plan.

Rondo had certainly been guilty of this, as he claimed that he needs to "dribble down the court less and try to advance the ball more," and with the weapons now in place, expect the Celtics to run with the best of them with the fearless Rondo leading.

Sean Heenehan
Posted by Josue Pavon at 12:41 PM
Email ThisBlogThis!Share to TwitterShare to FacebookShare to Pinterest