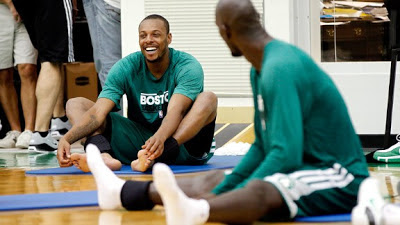 Kita Matungulu offered philosophies and techniques that Doc Rivers will be using for the rest of his coaching days.

The South African head of the basketball organization, Hoops 4 Hope, has been an observer at every Celtics training camp (except for one) in the last ten years. Last season's lockout kept him home in Cape Town, but this season he's back, observing Rivers' new plan and building up an early sense of excitement.

Matungulu comes from the land of Ubuntu, the African ethic of teamwork and community. In 2007, the Celtics believed in his teachings and was something that was instilled in the team throughout the entire season. Although he didn't give Rivers the idea of adopting Ubuntu as a team-wide mantra prior to the Celtics' 2008 title season, Matungulu's admiration was forever sealed.

The Celtics teams that followed, in Matungulu's opinion, didn't uphold the standard. But after returning to the team's facility in Waltham this fall, he saw a difference.


"I would say this is the most similar to 2008," he said. "You had guys who took their jobs very seriously when they crossed the line. You can see it with Jason Terry and with Courtney, and with Jeff Green."

He's seen a difference this season than he has in the past few seasons.


"This team has more Ubuntu than some of the teams that have been here. They help one another, they talk to one another, they share ideas, they share concepts. They haven't officially used it, but they have it. Someone told me hey, you have to give them Ubuntu, but surprisingly they already have it. They may not use the word, because it was associated with the group that won (the 2008 NBA title), but they are playing that way"

Of course the team is much different than 2008's group. Pierce, Garnett and Rondo are the only players who were on that team. Even Allen, who of course went to Miami in a very un-Ubuntu fashion, is gone. Matungulu senses there is a void, and like much of the Celtics organization, is unsettled by the thought of Allen as a member of the Heat.


"It's hard to hear some of those words coming from him, because that's not the Ray we know," he said. "It's very strange, very strange. I'm so used to Ray. Usually we would sit somewhere and have some frank conversations because he's a nice guy."

But according to Matungulu, Courtney Lee and Jason Terry have a lot in common with the '08 group.


"I remember Tony, Tony Allen," said Matungulu. "He was on Paul all of the time, and he used to make Paul better. Back then you had guys who, when they decided they were going to take you out, like James Posey, (Kendrick) Perkins and Tony Allen, there was no stopping them," he said. "These aren't the same guys, but you can see the same type of players with Jeff Green, Kris Joseph, Courtney, Jason, even Darko, so you have a sense of we're nice guys, but you're going to have to work for your stuff. All of these guys are very nice guys, but there is a similar feeling."

Josue Pavon
Posted by Josue Pavon at 7:46 PM
Email ThisBlogThis!Share to TwitterShare to FacebookShare to Pinterest