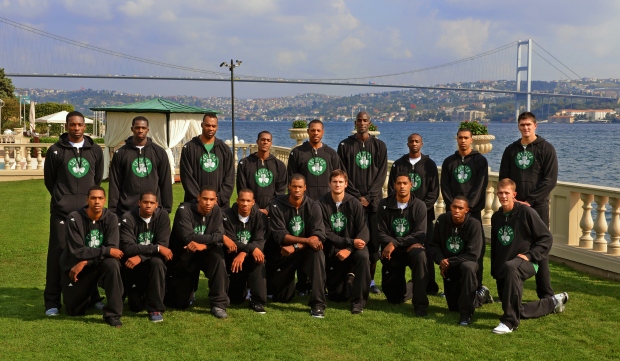 The Celtics are back in the States after completing their two game Eurotrip. Thank God it's over. Watching the Celtic's cruise through meaningless games against European teams was as about exciting as the Vice-Presidential Debate will be tonight. No one really cares who wins, and frankly, it doesn't matter who wins. Counting 'Big Bird' references, mentions of the Obama-Romney-Care-Mutation, and how many times Paul Ryan gives you that creepy look that makes you think twice about his criminal history in tonight's debate; will all more important than the outcome. Yeah, the Celtics lost to Fenerbahce Ulker and then blew out Milano, but who cares! It's like that show Whos Line is it Anyway; "Where everything is made up and the points don't matter."

The score may not have meant anything, but a few things caught my attention after the two game trip.
I  saw a lot of positives coming from the way the team gelled together, and we also got our first real look at a few players that came into the season with question marks. Here are the five things that should have Doc and Danny grinning after the Celtics European Vacation '12.

The biggest positive the Celtics can take from the first two games was Jeff Green. Green has been scrutinized every since stepping foot in Boston. He was a part of the very controversial trade that saw Kendrick Perkins leave town, and on top of that Green underperformed in the half season after the trade. Green then missed the entire 2011-12 season with heart surgery, and the Celtics showed a lot of faith in Green's ability to recover, when signing him to a large contract extension. 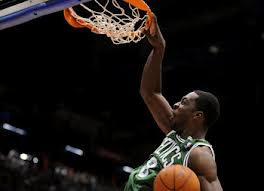 After two games, Green has shown why that faith may pay off, as he has been the best player for the Celtics so far in this young season.  He's averaged 16.5 points of the bench and was the leading scorer in both games. Green has showed his full skill set over the first two games. He is by far the most athletic forward on the team and has been able to get to the basket at ease. He also has shown immediate chemistry with his teammates, and has found himself wide open for some knockdown threes.

He has done all of this off the bench which is huge for the Celtics, who had one of the weakest benches in the league last year. They have done a lot to try and sure up their reserves and seem to have hit on Green.

Let's not get ahead of ourselves here. We do need to remember that it was against far inferior competition, but his energy level was great and that's a very good sign for the Celtics. It looks like Green is motivated to improve his game and is set to win over the Boston fans who have been luke-warm at best over him so far in his Celtics career.

The rookie was flat out impressive over the first two games of the preseason.  Sullinger was attacking the boards, in the right place for put backs on the offensive glass, and showed an ability to defend the pick and roll. One other takeaway that probably will mean the most over the long haul, was that it seems that the veterans on the Celtics have put a lot of trust in Sullinger. He was playing most of his minutes with the starters and was gelling with them seamlessly. There was a lot of talk about Sullinger's basketball IQ and how he was impressing the likes of KG, Paul Pierce, and Rajon Rondo before heading overseas. But did anyone think they would involve him in the offense this quickly? There really hasn't been a rookie in the "Big Three Era" that was playing significant  minutes with the starters, even during the preseason.

Sullinger keeps impressing like this he may force his way into more minutes and could even sneak his way into the starting lineup for good. Brandon Bass is a better shooter, but rebounding has been lacking from the Power Forward spot over the years. If Sullinger can play like he is now,against NBA competition, it could open a lot of opportunities for the first year man.

It looks like Rondo didn't spend all his time focusing on his internship with GQ this summer. He was also working on improving his jumper. Since his entrance into the league, the major knock on Rondo is that he just can't shoot from the outside. It's not only Rondo's inability to make the jumper, but his timidness to even attempt the shot that has let him down over the past few years.

This preseason, not only does it seem like Rondo has a new found confidence in his outside shot, he's backing it up with knocking those outside shots down. Rondo was 7-10 shooting the ball against Milano; consistently shooting from just inside the arc.

If he can do this consistently through out the upcoming season, it will open new doors for the 23rd ranked offense of a year ago. It could make the Celtics a force to reckon with on both ends of the floor.

If he's hitting from the outside, teams will have to defend up on Rondo, which in turn will open up the middle of the floor and allow Rondo to drive to the hole more effectively. This should lead to more free throw attempts for the Celtics point guard. And O' yeah, did  I mention Rondo went 8-8 from the charity stripe on the trip. Just a great sign for the C's

Unlike Piston's GM Joe Dumars,  I'm not putting much stock in the way Darko Millicic played in the European exhibition games. Don't worry I'd still draft Carmelo Anthony or Dwayne Wade over the 7'0" Serbian, but I would say he has cemented himself at least a roster spot with the Celtics after two games.

#99 looked like he could play a solid role for the Celtics in the upcoming season. He will basically replace Greg Stiemsma's minutes as a defensive sub and a shot blocker.

As sad as I was for 'The Stiemer' aka 'The Stiem Cleaner' aka 'The Stiemboat Captian' aka 'So Stiemey', to sign with the  T-Wolves this off season, I am confident Darko can step right in and contribute in that role.

Yet, one thing stands in the way. It is crucial that we find Darko a nickname. There are so many ways we can go with this but I hope by seasons start one... or five nicknames stick. I mean he wears the number 99, has all ready said he will kill whoever he needs to for a Celtics win, and I'm sure Tommy by game number five will compare him to a young, Serbian Hakeem Olajuwan. Darko is going to be a fan favorite, and I for one will be in the drivers seat of that band wagon. Get your tickets now. 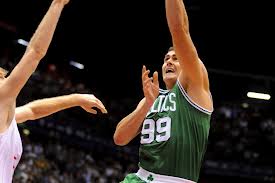 Here are my top 4 nicknames in no particular order. Lets get this started:
#1 The Milicic Murderer
#2 Darko the Ripper
#3 Darko "You were once the #2 overall pick in the NBA draft and were recently traded for Brian Cardinal and cash considerations" Millicic
#4 DAAAAAHHHHHHHHKOOOOOOOOOOOO ( this one should stick in the Garden)

#5 Celtics Grow Together as a 'Family'

It's well documented that the last time the Celtics went on one of these Chevy Chase-esque European Vacations, in 2008,it resulted in a championship. You heard a lot of clips from the Celtics, including Doc Rivers state how big that trip to Rome was to bring everyone together before the season, and crediting that with being huge in hoisting Banner 17.

This trip comes at a very convenient time. The Celtics are moving on from Ray Allen and are bringing in a lot of new faces. Also there has been a lot of talk about the leadership role switching from Pierce and Garnett, and emphasizing that Rajon Rondo is the new 'leader' of the team.

Instead of going there separate ways after practice they are forced to stay together, get to know each other, and take part in activities that will only bring them closer in the end.

With all the changes and question marks the Celtics have coming into this season this trip should have been beneficial and give them a head start on creating chemistry over their NBA counterparts.

-Sean Dutra
Get at me on Twitter  @Seandutra
Posted by SeanDutra at 2:32 PM
Email ThisBlogThis!Share to TwitterShare to FacebookShare to Pinterest