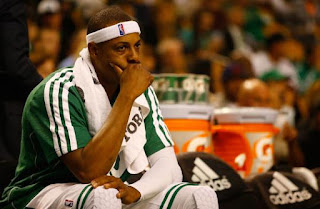 Hey, it could be worse, we could be the Los Angeles Lakers right now.

It was pretty ugly last night though. The Celtics were truly out played by an inferior opponent. It was one thing against the Heat on Tuesday night, Miami was riding the high of raising their championship banner and came out with a ton of energy. But last night the lowly Milwaukee Bucks came in to the Boston Garden and layed a whopping on the Celtics.

The Celtics are now 0-2. No need to push the panic button here though. The Celtics had a lot of moving parts this off season and they need time to gel. Obviously defense they need to gel quickly, or tonight's game against the young, athletic, and potentially sleeper 8th seed Washington Wizards could be a repeat of last nights game.

Here's  three things to take away from last nights game.

1. The defense needs to improve, and fast.

The Celtics, again for the second straight game, played alarmingly bad defense. Nearly every possession the Bucks had last night they were able to get to the basket at ease.  Personally, I think they played worse defense last night against Milwaukee, then they did in Miami. If the Celtics were to put up a performance like that against a team that isn't relying on TOBIAS FREAKING HARRIS to score consistently, they could have allowed 150 last night.

The rotations have been slow and inconsistent, the new guys look lost, and even the veterans including Garnett look like they may have lost a step defensively. The intensity that has been the staple for the Celtics 2nd ranked defense of last year, just hasn't been there for the first two games.

2. Rajon Rondo's assist streak : Impressive but could be distracting.

Rajon Rondo has dished out ten or more assists in 26 consecutive games. Its the longest streak in the NBA since 1992, but it may be more of a distraction than anything for the Celtics.

Rondo at times seems like he is trying to get assists, almost forcing the action. It was apparent last night a few times. Rondo was only credited with two turnovers but he was forcing the issue to Pierce and Green. That led to to more turnovers, as they were in an awkward position to score the basketball. 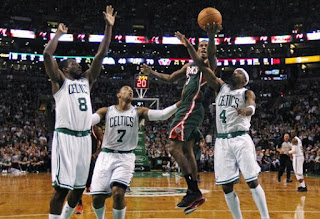 Obviously, it is important for Rondo to distribute to his scorers, but going forward he cannot let that make him tentative to score himself. The times that he has attempted to score this year, he is able to get to the basket at will. We need to see more of that and less of him worrying about setting the streak to 27.

3. It may be time to spice up the starting lineup, Doc.

The power forward position is full of options for Doc Rivers. The way the rotation currently stands, Brandon Bass and Kevin Garnett are on the floor a lot together, including the starting lineup. Now Brandon Bass is not known for his rebounding, but he is a big body that is certainly capable of rebounding on both ends. What is happening, is that when Garnett and Bass are both taken out of the game, the Celtics have no big that can legitimately challenge down low with other teams.

If Doc was to put Jeff Green in the starting lineup and get him more play with Garnett, when Garnett leaves the game it gives you more options for not losing out on rebounding the basketball. At that point you would probably see more combinations of Bass, and Darko or Wilcox
Something needs to be fiddled with there because when Garnett leaves the game it is ugly down low.

We'll see tonight how that Celtics are able to bounce back from the two consecutive losses. Historically, the Celtics are awful in the second half of a back to back, but they desperately need a win tonight to avoid starting the season 0-3.

Get at me on twitter @seandutra
Posted by SeanDutra at 3:00 PM
Email ThisBlogThis!Share to TwitterShare to FacebookShare to Pinterest