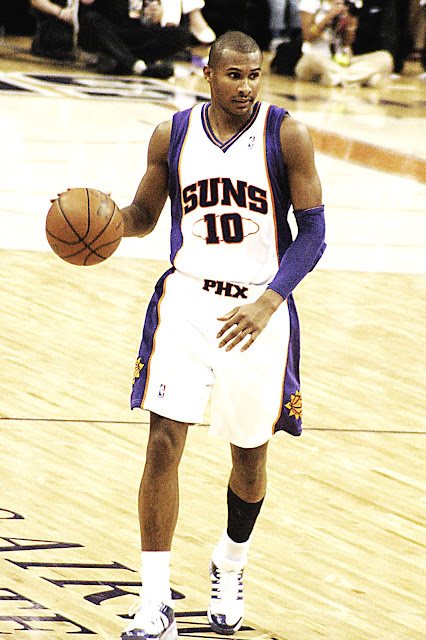 Leandro Barbosa was born on November 28, 1982 in São Paulo, Brazil. He is nicknamed the "Brazilian Blur," referring to the fact that he is one of the fastest players in the NBA. He started his professional career at Palmeiras when he was just 17 years old. By age 20 he was already playing for the Brazilian national team, where they competed at the 2002 FIBA World Championship Games.

At 6'3" with a wing span of 6'10" he was selected 28th overall in the 2003 NBA draft by the San Antonio Spurs, but his rights were traded to the Phoenix Suns for a future number one pick. Barbosa played for the Suns for six years before be dealt to the Toronto Raptors in 2009 for Hedo Turkoglu. Last season he was dealt again to the Indiana Pacers, where he helped take the Pacers into the second round of the playoffs for the first time since the 2004 playoffs.

In nine seasons Leandro has career averages of 12.5PPG/2.5APG/2.4RPG and a 39 percent average from three-point range. Coming off the bench has been Barbosa role throughout his career. He was crowned the NBA's Sixth Man of the Year award following the 2006-2007 season. In that season he averaged 18.1 points, 2.7 rebounds and 4 assists a game. He looks to add a championship ring to his resume as he is set to join the Celtics this weekend.

What can we expect from Leandro this season? The fact that he enjoyed most of his success when he played back up point guard for the two-time MVP, Steve Nash, shows that he learned a lot in that period. Barbosa hasn't played behind an MVP-caliber point guard in three years now, so he knows how to carry himself and knows what Doc expects of him. This adds another ball-handler who also creates instant offense (deadly three-point shooter). For a team who wants to run, you can never have too many of these guys, especially if you know M.I.A. is at the top of the hill looking down. Simply put, he is a combo guard who can play either the one or the two and you don't have to worry about the team's intensity going down once Rondo is on the bench.

I see Barbosa averaging at least seven to eight points, two to three assists with a couple of made three pointers sprinkled in there as well. He will be a Nate Robinson- type, quick guard but with more discipline. At least until Avery Bradley is officially back in the lineup, look for LB to get significant playing time at both guard positions and sharing that backcourt with the JET, while moving Courtney Lee to the three. Lets be honest the possibilities are endless with this team, and there could also be scenarios where he is in at the end of games with Rondo, you never know.

This is a very good addition. Dare I say... the deepest team in the NBA? I'll let you argue that. Welcome to Boston, Leandro!