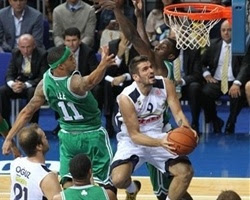 The Boston Celtics opened up their 2012-12 preseason last night with a 97-91 loss to Fenerbahce Ulker of Istanbul, Turkey. To their credit, this was not a random Turkish team they were facing. They're one of the best teams in Europe, and they proved it with an impressive outing against one of the NBA's best.

Fenerbahce came out of the gate shooting well by jumping out to a 18-8 lead in the first quarter. Led by their two American standouts in Romain Sato and speedy guard Bo McCalebb, who respectively finished the game with 24 and 21 points, they were able to lead their team to victory.

It was their fourth game in as many nights for Fenerbahce, and they wanted to show their home crowd that they could run with the likes of the Celtics. Meanwhile, this was Boston's first opponent and they struggled with their offense a bit, as the team committed 14 turnovers in the first half of the game.

"Our goal was 14 turnovers, and we had that at halftime," said Doc Rivers. "So I had to explain to the guys that I didn't mean 14 in a half, I meant 14 for the game. That was just sloppy."

Fenerbahce was able to take advantage of the turnovers and flipped a one-point deficit after the first quarter into a 55-45 lead at halftime.

Boston hung around in the third quarter, getting within six points, but Fenerbahce held a 79-72 lead going into the fourth, due to forced turnovers and great three point shooting. In the fourth, Doc held out the starters and Jason Terry, while leaving Jeff Green in with all the rookies to try and pull of a comeback. They made their run with Green, as he put up 11 points in the quarter by driving to the hoop and knocking down mid-range jumpers. His last made basket cut Fenerbahce's lead to 94-91 with 1:19 remaining in the game.

But as was the case the entire game, Fenerbahce hit big shots whenever Boston got within striking distance of tying or taking a lead. Sato hit a three-pointer from the corner to double the team's lead to six points with only 1:04 remaining on the clock. Both teams went scoreless for the rest of the contest, Fenerbahce held on to a 97-91 win and the home crowd and media celebrated an incredible accomplishment for its team's history.

This outcome for Boston is not as bad as some people might perceive it to be. Doc understands the fact that this was a loss to a very, very good Fenerbahce team that won't cause him to worry, especially not this early.

"It's one game... if we play like this in April, we won't make it to May. But I don't think we should worry about that today."

Some keys things that can be taken away from this game was the play of the bench crew, which I think might have been what Doc wanted to see, how they mesh as the starters do. Jeff Green and Jared Sullinger lead the team with 16 points apiece and Jason Terry chipped in with 12, including being three from three from downtown. That's 44 of Boston's 91 points with just the "Three J's" (Jason, Jeff and Jared). Not to mention on the glass, Sullinger, Green and Darko combined for 18 boards (8 on the offensive end). While Fab Melo in nine minutes grabbed three rebounds and had a blocked shot. This is a very good sign going forward on how deep this team can be.

Meanwhile the play of Rondo was great to watch as he added 13 points and nine assists, you can see how he is about being aggressive from the jump. If you were worried about him being in shape, don't be, he is as athletic as they come. The best stat of the night was the fact Rondo was a perfect six for six from the free throw line and even made a three pointer. He showed great confidence in all of his shots. It's evident he has been working on his form. Look for more of this as preseason rolls on. His five turnovers were the only negative. A negative that the team needs to work on, not only Rajon.

Boston turned the ball over 25 times, which led to 21 points. They must do a better job come Sunday of taking care of the ball. Clearly the first game jitters and excitement might of contributed to this, and the face that Doc wants this team to run, score, and dribble less. Also the pick and roll coverage was very weak at times, especially with the second unit. I'm sure this will improve vastly as they will have more practice time and more tape to watch.

Overall, I am not disappointed with how the team played last night. Doc trusted Jeff Green, who had not played a NBA game since May of 2011 and Jared Sullinger, a 20 year old rookie to bring this team back to win the game, and they nearly pulled it off. You can see how important these two will be. The Celtics shot 50 percent for the game and had a nice balance of scoring, proof that the depth of this team has something that no one can ignore.

Celtics will have a chance to clean up the negatives and capitalize on the positives come tomorrow night in Milan, Italy against Emporio Armani. This Italian team is not as strong as Fenerbahce, but nonetheless Boston knows how important it is to take care of the ball and execute defensive tasks in order to head back to the states 1-1.

Posted by Josue Pavon at 6:39 PM
Email ThisBlogThis!Share to TwitterShare to FacebookShare to Pinterest