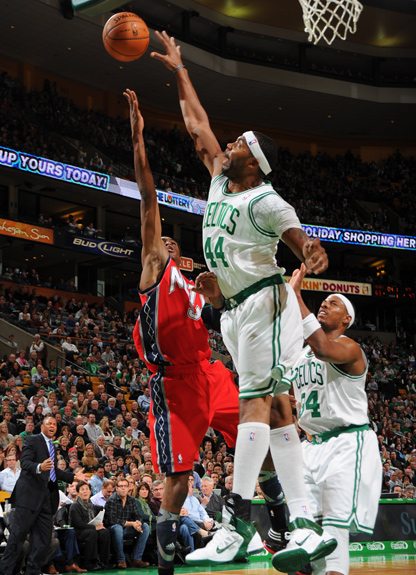 After season ending heart surgery, Chris Wilcox missed the second half of the season last year, only appearing in 28 games.  He seems to be back in full health and that is very good news for the Boston Celtics.

Wilcox, is a nine year veteran who has enjoyed stints of success, but mainly has been a solid bench player for his career. He was drafted out of Maryland with the 8th overall pick in the 2002 NBA Draft by the L.A. Clippers. He's averaged 8 and 5 over his career, that has been derailed by his inability to stay on the court.

For the 2012-13 Celtics, Wilcox will be called upon to add depth to the Center/PF position.  He will be competing for minutes with Brandon Bass, Jeff Green, Jared Sullinger, Darko Milicic and Kevin Garnett. Now Wilcox is not going to get on the floor nearly as much as he would of last year, due to the suddenly increased number of big men, but is great insurance for looming injuries to anyone ahead of him on the depth chart.

Wilcox did show flashes last year on why the Celtics should find him some minutes. He proved he can be an 'energy guy', rebounding and playing solid defense on opposing teams PF's. Also he showed some chemistry with Rondo last year, and a willingness to run the floor.
Here is his biggest problem, Jared Sullinger. The rookie will be looking to steal his floor time as they seem to be the exact same player, with the edge probably going to Sullinger's outside shooting.

My prediction for Wilcox is on the bleak end of the spectrum as to impact on the court. However, I really wouldn't be surprised on a number of occasions we see him make a big play or two in a close game, making the most out of his limited floor time.

Wilcox has a very inspirational story, and its great to see him back on the court ready to go. And his beard is freaking pimp.
Ladies and Gentlemen, Chris Wilcox

-Sean Dutra
Get at me on Twitter  @seandutra
Posted by SeanDutra at 2:42 PM
Email ThisBlogThis!Share to TwitterShare to FacebookShare to Pinterest