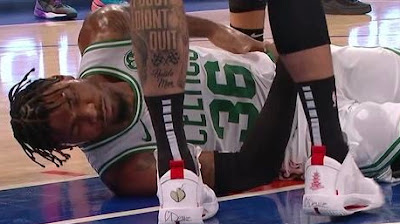 While the Celtics beat the New York Knicks at Madison Square Garden on Sunday afternoon, it's unknown if Boston will be without Marcus Smart for any significant amount of time.

The Celtics guard left in the third quarter of the 113-104 win and did not return after taking, what the team initially called a "direct blow to the abdomen," in an attempt to take a charge against Knicks forward Kevin Knox.


"The only thing I heard is that it was, I don't know if it's his oblique, or right in that area, and they said, 'It wasn't as bad as in the past,'" Celtics coach Brad Stevens said afterwards. "I don't know what that means. I'm sure we'll get more information in the next couple hours." [ESPN Boston]

Smart was called for a blocking foul and immediately fell to the floor in pain and stayed down for several minutes until a timeout was called. He was eventually helped off the court and into the locker room for further examination.


According to NBC Sports Boston, Smart confirmed while leaving the arena that he was hit in the "same spot," referring to an injury back in April of last season, when he ran into the hip of Orlando Magic's big man Nikola Vucevic and missed a month of action with a torn left oblique.

The Celtics officially listed Smart as "doubtful" for Wednesday night's home game against the Miami Heat with an "abdomen contusion."


#NEBHInjuryReport for tomorrow vs Miami:

"Sounds like it's just like a contusion, so that's good, but that doesn't mean it's not super sore," Stevens said. "And if it's super sore, he's not going to play." [CelticsBlog]

Smart, who has already suffered a bruise hip, sprained ankle and fingers (including a jammed knuckle) this season, did not practice on Tuesday due to illness. The longest tenured Celtic has yet to miss any of the team's 19 games so far, while averaging 12 points, 4.7 assists and 3.4 rebounds per contest.