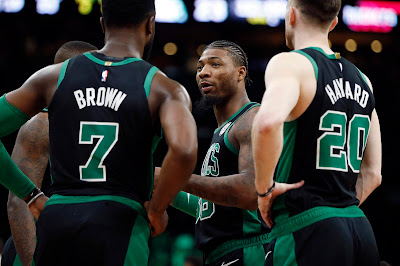 The ghost of last season continues to haunt the 2019-20 Celtics.

It's difficult for it not to manifest itself every now and again, and for Boston this a good thing.

For guys like Jaylen Brown, Jayson Tatum and Marcus Smart, the experience gained from last year's disappointing finish gives them a sense of perspective, one that has drastically changed their outlook on this season but hasn't prevented them from looking back.

Therefore, it didn't come as a surprise to hear players like Brown and Smart remind everyone of just how different things were a year ago. Subtly, one week into the regular season, Celtics players of yesteryear are already sharing anecdotes that exemplify change.

Following Friday night's win against the Raptors, Brown was asked about an ill-advised shot he took that left Brad Stevens visibly upset and led to a conversation between Brown and his new starting point guard, Kemba Walker.

Stevens enjoyed every second of this.


"I loved (Brown's) reaction," Stevens said. "He knew, and I loved Kemba's reaction. Both of those guys reacted great. That's what it's all about."

It was an exchange that may have gone down a different road last season -- where the Celtics bench saw its fair share of tantrums, shoving and finger-pointing.


"It's great for me just to know that he has your back because you don't always have that care or that scenario," Brown said after the game. "Easily somebody could have said something or got upset or thrown a tantrum or whatever, but Kemba was like, 'No, you're good. Just play.' It was the confidence I needed to make sure the next play was the right play."

One night in Miami, Brown was on the receiving end of one of those tantrums when he and his former teammate Marcus Morris needed to be separated during a timeout, which now feels like ages ago. Meanwhile, 215 miles south of Boston, the Nets are reportedly already feeling "queasy" about the Celtics' former point guard leading its ship.

Kyrie Irving's mood swings, most-notably highlighted by ESPN.com's Jackie MacMullan, came out in full force last year after the Celtics' final attempt to force overtime came up short against the Magic in Orlando. A flashback of seeing Irving reaming out Gordon Hayward for giving the ball to Tatum instead of him in the closing seconds against the Magic comes to mind, and is something would make any team weary about how things will play out this season.

Brooklyn can only hope the road between now and Kevin Durant's triumphant return in 2020 will be a smooth one despite a few reported hiccups throughout the early stages of the regular season's infancy. As for the Celtics (2-1), the chemistry between players is as good as it gets in the NBA, at least for now.

With only eight returning members from the 2018-19 team, the Celtics have already formed close bonds between its players.


"On and off the court, it's been incredible for us," Smart said. "Everybody's joking, everybody's laughing. Everybody's happy. That was a big thing for us, a lot of people wasn't happy last year so to see everybody's happy faces, smiling and everything. It helps a lot."

Smart, who entered the season as the team's longest-tenured player, has taken on a new responsibility for his team.

With four days sandwiched between Saturday's win and Wednesday's marquee matchup against the Bucks at TD Garden, Smart saw it as a good opportunity for a team outing. He took his squad out to the movies to see Terminator: Dark Fate.


"As a leader, that's one of the things I have to be able to do -- get guys together," Smart explained after Saturday's win. "Especially in times like this where we're doing good, just came off our second (win) in a row. We feel good about ourselves. Just making sure we can keep ourselves humble.We still got a lot of things to work on."

The Celtics will take on a big test Wednesday when they take on Giannis Antetokounmpo and the Bucks, a team projected to be one of their biggest threats this season.