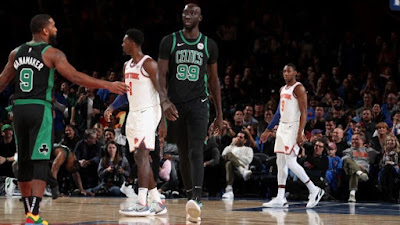 Tacko Fall made his NBA debut on Saturday night, as the Celtics beat the Knicks 118-95 at Madison Square Garden.

As the game was clearly out of reach for the home team more than halfway through the fourth quarter, the Knicks fans started a "We want Tacko" chant for the Celtics rookie, who called it "a dream come true" to be officially active on the main roster just prior to tip-off.

Though considered garbage time, Fall checked in with just under four minutes to play and was cheered each time he touched the ball.


"I don't know if anybody not drafted in the top two or three has ever felt the kind of stuff he feels when he touches the ball," Celtics coach Brad Stevens said after the game.

Fall finished 2-of-4 with four points on two dunks and three rebound in 3 minutes and 38 seconds in his first time being available for the Celtics this season.

With the game also being nationally televised on NBA TV, the obvious question was brought up, how did Tacko Fall go un-drafted?

The short answer would be that NBA general mangers don't view old-school bigs like they once did in Red Auerbach's or even Danny Ainge's era. A total of 30 GM's passed on choosing Fall this past June, going instead with the much-sought-after ball handlers and wings. But the buzz around the league now is pure excitement that "Tacko Fever" has generated - especially since Ainge has brought him into the Celtics fold.

As a former researcher, I know numbers don't lie, but they also don't tell the whole story. Though Fall only played three minutes - scoring four points and grabbing three rebounds - and a blocked shot that never made it's way onto the stat sheet in his debut, it's a mighty poor sample size (0.08 percent of possible regular season minutes) of what overall numbers could look like if he were to be in Stevens' rotation.


Fall has the same malady as Robert Williams - being foul prone - which can be cured with time, experience and seasoning. But getting back to the question of not being drafted, it is obvious that the NBA executives out there considered him an extremely-long center that would only score on dunks and put-backs - would get his share of rebounds - and block some shots, which is the profile of the old-school centers. The only stretch part of his game would be his height. Not good in today's game, right?

After watching him on the floor against the Knicks, that thinking may be changing. I have argued right along that Ainge needs to lock Fall in, and he has done just that - signing the rookie big man to a two-way deal. A lot of NBA GM's may end up wishing for a do-over on their picks from the 2019 NBA draft.

While Fall's height continues to wow fans, his Celtics teammates and coaches hope those watching and taking notice "appreciate him for how good of a kid he is and how hard he is working to make the NBA."


"Everybody is yelling because of his size," Stevens said. "I get it. Every time he walks in the room, I say, 'Man, he's tall' under my breath. But at the same time, I hope people appreciate him for who he is and how hard he is working."