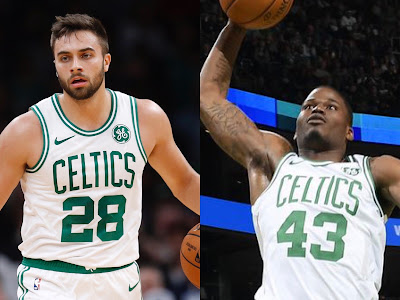 Less than a week after the Celtics turned Max Strus' two-way contract into a NBA deal, the team reportedly waived the 6-foot-6 forward on Saturday.


The Celtics converted Tacko Fall's Exhibit 10 contract into a two-way, that directly put Strus into competition with Javonte Green for the team's final roster spot. There hasn't been an official announcement yet from the C's brass on Green, who averaged 9.3 points and 4 rebounds during his four preseason appearances, on winning the job.

Green signed a two-year, partially guaranteed contract back in July, following a solid NBA Summer League out in Las Vegas.

The Celtics have also waived Kaiser Gates and Yante Maten, as they both can still play for Boston's G-League affiliates, the Maine Red Claws. Strus will have to wait to be either claimed off of waivers or sign with a new team because of the amount that was guaranteed by the Celtics when they gave him a new standard NBA deal.