Al Horford on play against Marcus Smart: 'Such a good job of flopping' 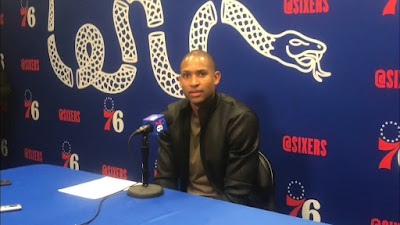 Playing against his former team, Al Horford said Wednesday night's win against the Celtics brought back some old memories.

He shared friendly pleasantries shared prior to tip-off with guys like Jayson Tatum and his former assistant coaches and then following the start of the game there was a play involving Marcus Smart that reminded Horford of his days in Boston. Except this time, he was on the other end of one of Smart's deceiving defensive play.

The two got tied up behind the arc -- where Smart flailed his arms, which resulted in an offensive foul on Horford, who got into the referees' face and complained about the call. According to Horford, the official approached him later on and told him Horford was correct and the wrong call was made between Horford and Smart.


"Marcus (Smart) does such a good job of flopping though, like you know, selling it. Just making sure," Horford smiled. "He does that. That's what he does. When I was on his side I loved it, I thought it was great. But now, he got me, he got me pretty good."

Horford finished the night with 16 points and three assists in a 107-93 win over the Celtics. Wednesday's season opener was certainly a day that was circled on Horford's calendar over the summer, not only because it was his debut but because of his opponent.

Now that it's over, Horford can focus solely on playing for his new team and was thrilled that his first game as a member of the Sixers resulted in a win.


"When I saw the schedule I was like 'first game of the season,' but it was good," Horford said. "Just relieved from that part and also very happy, very happy we got the win tonight."