Kemba Walker excited for Celtics debut: 'This is what I wanted' 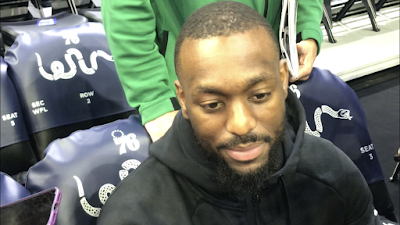 PHILADELPHIA -- Kemba Walker can probably count on one hand how many times he's been featured on national television as a pro during the regular season.

After eight trying seasons with the Hornets, Walker is ready to step up on one of the biggest stages the NBA has to offer -- a primetime Celtics debut on the road against a favored Sixers team. It's the kind of marquee matchup he signed up for when Walker inked his four-year, $140 million deal over the summer.


"No question," Walker said. "I probably played just a handful of national t.v. games in my whole career. This is my first official game with them and it's already on ESPN. This is what I wanted."

The Celtics finished their exhibition schedule with a perfect 4-0 record but Wednesday night's matchup in Philly will by far be their toughest challenge thus far. Being a part of a such a talented group has been an adjustment for the veteran point guard, who said it's encouraged him to become a stronger distributor for his team rather than the player who often was forced to take matters into his own hands during his playing days in Charlotte.


"For me, it's not being passive," Walker explained. "It's easy to be passive when you're in a new situation. You know, you want guys to like you and I'm not trying to do too much  but at the same time I have to find how to be myself. I just have to find that balance, I think that's probably been the biggest adjustment. You know, Brad (Stevens), a few guys like Jayson (Tatum), Gordon (Hayward), Jaylen (Brown), (Marcus) Smart -- they're the ones telling me 'stop being passive, go out there and do what I did in Charlotte.'

For Walker, having talented players like Tatum, Hayward, Brown and Smart at his disposal is not only going to translate into wins but will also make for an entertaining team for Celtics fans to watch.


"I'm excited, I'm excited. These dudes are so talented," Walker said. "I'm just looking forward to going out there and competing with these guys on a nightly basis so it's going to be fun, I think. I think we're going to be a really excited team to watch."

Topping the Sixers in their own house will be one of the tougher challenges in the east and a chance to steal one and set the tone early would be an excellent start to the season. Boston will look to knock off Philly Wednesday before hosting the champion Raptors at TD Garden Friday night.