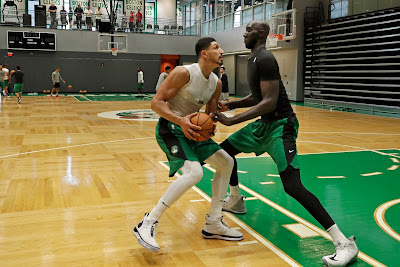 Enes Kanter has already found his favorite sparring buddy at Celtics training camp, and it's a player who may not be on Brad Stevens' roster by the start of the regular season.

It's become an early season ritual for Kanter, who's not only been a player who spends a lot of time at the Celtics' practice facility but has also been the source of laughs and jokes among the players and media members at Media Day and training camp.

Tacko Fall, the 7-foot-4 undrafted rookie who's hoping to grab a final spot on Stevens' opening night roster, has been giving Kanter fits. When a reporter noticed a speck of blood on Kanter's shirt, the eight-year big man laughed and pointed that Fall was the one to blame.


"There's not much guys like that in the league, he's 7-7, 300 pounds," Kanter said. "If you can go against him, you can go against anybody. I'm making him better, he's making me better at the same time. It's special having to have him on your side."

Kanter was not only impressed by Fall's physicality in the paint but also his offensive prowess.


"He's learning, he's having fun, he's been playing unbelievable," Kanter said. "Not a lot of people know that but he got that jump-shot, turnaround jump-shot. Yesterday I called him the 'Senegalese Dirk.' He got that one-legged, step-back, fade-away shot. He can actually make that. I was pretty shocked."

Fall, who spoke highly of Kanter at Media Day on Monday, is on an Exhibit-10 contract. It's a one year deal that isn't guaranteed but can be converted into a two-way before the start of the regular season.

He averaged 7.2 points, 4 rebounds and 1.4 blocks in 12.6 minutes per game throughout summer league play.