Danny Ainge on Jaylen Brown signing extension: 'He is a major part of our championship goals' 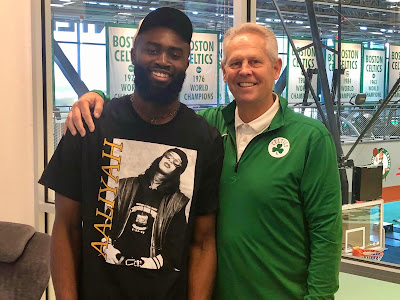 The Celtics and Jaylen Brown beat the clock on Monday when both sides reached an agreement on a four-year, $115 million extension just hours before the 6 p.m. deadline.

It's clear that the Celtics have bought in on Brown's potential by getting a deal done now instead of taking the risk in letting the 22-year-old forward become a restricted free agent next summer in a weak class of players seeking a lucrative payday.

No one seemed more excited than Celtics president of basketball operations Danny Ainge, once Brown's new contract, which begins next season, was finalized.


"Jaylen has made tremendous strides over the last three years and has become a fantastic player for us on both ends of the court," Ainge said in the team's official press release. "He's a great person and hard worker who, at 22 years old, can score and defend against the best players in the NBA. Jaylen is a true professional who did a great job accepting his role last season, and he is a major part of our championship goals."

According to Jay King of The Athletic, only $103 million of Brown's contract is guaranteed, while the other $12 million are tied up in possible incentives.

Yahoo Sports' Chris Haynes broke down the specifics of Brown's contract incentives, and also reported that there is no team or player option attached to the deal:


Yahoo Sources: On Jaylen Brown’s four-year extension, he can secure $8M in incentives if he wins MVP, DPOY or makes one of three All-NBA Teams. He pockets $4M if plays 65 or more games, team wins 49 or more games and reaches second round of playoffs. Total guaranteed salary $103M
— Chris Haynes (@ChrisBHaynes) October 21, 2019


Brown becomes the first Celtics player since Rajon Rondo in 2009 to sign a rookie-scale extension, making him only the second to do so in the Ainge era. The former No. 3 pick in the 2016 NBA Draft has averages of 11.2 points on 46.2 percent shooting, including 36.5 percent from 3-point range and 4 rebounds during his first three seasons in Boston.

With the loss of Kyrie Irving, Al Horford, Marcus Morris and Terry Rozier, who all ate into Brown's minutes last season, to free agency -- that should free up more playing time up time for the Celtics wing during the 2019-20 campaign -- which tips-off against the 76ers on Wednesday night.