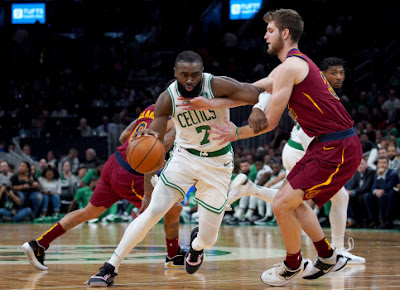 Jaylen Brown is taking on a new role this year with the Celtics.

Entering the fourth season of his career, Brown says every season is different for him. There are new goals set and a different approach in place, another year in the NBA means a newfound role for Brad Stevens and the Celtics, and the coming 2019-2020 campaign could turnout to be his best showing.

That's the plan, at least.

"We'll see how things play out. I'm excited. I'm always looking ahead, being positive and making the best of whatever situation I'm in."

Brown has paved a way for himself as a proven two-way player. The rookie who held his own against LeBron James has grown into the kind of defender Stevens has leaned on against opposing superstars, while Brown has continued to sharpen his offense along the way.

Flipping the switch to another gear in the coming season would be a fitting time for Brown to elevate his game. It's a contract year for the young forward, and an extraordinary season would raise his stock upward towards the group of top-tier NBA players that will be swimming in 2020's free agency pool.

The Celtics are looking to build on Brown's progression, they're going to rely on his production on both ends.


"We need him to guard bigger guys and he's proven that he can do that over time," Stevens said. "There are some matchups that can be a challenge at that spot. But he can be a guy in that spot guarding the (wings). He can be a guy that we throw on a point guard in a game, and we put on a (power forward) in a game."

Reeling from his experience with Team USA over the summer, Brown's momentum has certainly carried over to the preseason. His stat line doesn't amaze nearly as much as the eye test -- one that Brown passes with flying colors, especially on the offensive end of the floor.

He's been able to weave through defenders in transition with ease, attack the rim and make plays for his teammates. Brown's game, alongside teammates Jayson Tatum and Gordon Hayward, has stood out the most throughout the Celtics' first three preseason games.

Brown shot 52.4 percent during that span, on 10-of-17 attempts. His offensive approach of late is telling, he's no longer settling for contested shots or passing up chances to attack.

Instead, Brown takes matters into his own hands. He's been aggressive and persistent with more finesse and less hesitation.


"I am going to say the Team USA experience helped me," Brown said. "I think when you're in a situation like that where you're around great coaches and that amount of talent, I think the only thing you can do is get better and learn from that environment. It's a great environment to be in so I feel like it is definitely helpful and hopefully we will be able to see it this season."

Boston will conclude its preseason schedule against the Cavaliers Tuesday in Cleveland and look to go a perfect 4-0 before opening its regular season on October 23 in Philadelphia.