Terry Rozier ready for challenges with Hornets, keeps in touch with Kyrie Irving 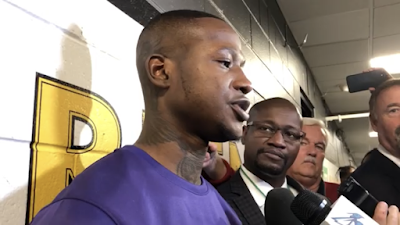 Former Celtic Terry Rozier returned to TD Garden for the first time as a member of the Hornets Sunday night.

After spending four years in Boston, Rozier enters the next chapter of his career in Charlotte -- where he hopes to blossom into a leader for a young Hornets team that didn't yearn long for its replacement at the starting point guard position.

Kemba Walker's vacancy opened an opportunity for Rozier, a fan favorite in Boston who will be most remembered in the city for his impressive performance throughout Celtics' playoff run in 2018. Rozier opened up about his experience in Charlotte thus far.


"It's been great, I've been learning," Rozier said. "Just continue to learn, continue to grow. Growing with my teammates, learn from my coach. Obviously I'm in a new role, a bigger role, but it's just something that I've always wanted, I'm ready for. I'm going to just keep getting better as I go."

His three-year, $56.7 million deal with the Hornets certainly didn't prevent Rozier from reaching out to his former teammates. He talked about catching up with a few players over the summer, and how he spent time with them hours before tip-off Sunday.

Rozier was also asked if he's kept in touch with another former teammate of his -- Kyrie Irving.


"I talked to him a little bit," Rozier responded. "Just texting, we were both in L.A. trying to get some runs going but that didn't get to happen. I didn't even notice he had mentioned me in his press conference. Kyrie's always going to be Kyrie, he's always going to be one phone call away, right there so whenever I need him I'll reach out to him for sure."

The free agency process was more stressful than he initially anticipated. NBA players don't know what to truly expect until it happens to them, according to Rozier, and while not knowing which city he was going to play for led to sleepless nights, he told the media, he's certainly happy with the decision he made.

Now it's time to focus on growing not only as a leader but also as a team, something he already feels like is off to a good start.


"Just connect with the guys, just let everybody be them self," Rozier explained. "I'm not a guy that wants to step on anybody's toes, tell them how to be a pro. Everybody has to be a pro on their own, find out their own ways how to become a pro. We got a lot of young guys on the team, you know. I'm young, I connect with those guys.

While reminiscing about the past, Rozier was asked about the previous season and what he thought went awry and led to a second-round exit in the playoffs.


"We all had a goal at the beginning of the season," Rozier said. "We all had a goal throughout the whole season and that was to win the whole thing. It's didn't happen so I think it was tough on all of us. I think we all wanted that.with all the talent we had but it didn't work out that way. We just came up short. Nothing we can do about it now, it's in the past."

Celtics fans at TD Garden gave Rozier a warm ovation when his name was introduced. He finished with nine points on 3-of-7 attempts to go with his 9 assists and a pair of steals in 22 minutes in a 107-106 Celtics win over the Hornets.