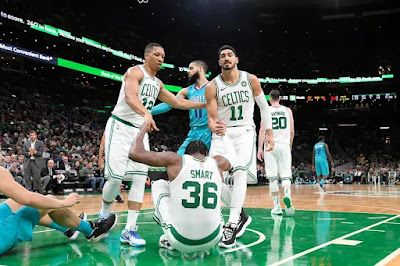 PHILADELPHIA -- Celtics rookie Grant Williams is having the time of his life.

Adjusting to the NBA and his new teammates has been a smooth transition for the Celtics' first-round pick, so far. It seems like every time you see Williams around his teammates -- either at practice, on the sidelines or in passing -- you often see him surrounded by a laughing group of players with a smile painted across his face.

That familiar grin shined as it entered the Celtics' new locker room at TD Garden prior to Boston's final preseason game. And it was a fitting image for a team looking forward to its fresh start.

There's a new locker room, new faces, and a different vibe for this 2019-20 Celtics team. For the returning players, the clean slate is refreshing considering the disappointing way things ended last year but for rookies like Williams, every day has been a learning experience.


"Honestly, it's been incredible," Williams said. "You're like 'Wow I'm on an NBA team' for one. Then you realize you're on the Boston Celtics and it's like even crazier. And then playing with the guys you're on the same team with -- a guy like Kemba (Walker), a guy like J.T. (Jayson Tatum) -- guys who I've either played against or watched. It's pretty cool. It's been a great ride and the only thing we can do is keep improving."

The beginning is always eye-opening for most rooks. There's a lot to take in, changes that take some getting used to and for Williams, playing in Boston alongside players he watched prior to being drafted this past June alone has been some of the biggest takeaways thus far, including what he's learned from his new teammates by seeing the manner in which they approach each and every play, game or practice.


"How talented guys are is one of my biggest takeaways because when you're in college you think 'wow these guys are really good, he's going to be 'this' at the next level' and then you realize the next level is even crazier," Williams explained. "The next level is one in itself so the talent and just understanding how mental and cerebral they see the game and know the game."

There's also been a genuine camaraderie between the Celtics' players, one that was documented throughout training camp and is unlike the other teams Williams played for in the past. He even went as far as saying it's one of the funniest team's he's ever been on.

Which teammates are the funniest?

Williams smiles, turns around and points to Jayson Tatum, whose locker is to the right of Williams' locker.


"J.T. is definitely a funny guy," Williams laughed. "Tacko (Fall) is a funny guy. Carsen (Edwards), Romeo (Langford), the entire team is funny in someway or the other in my opinion."

The team's early chemistry formed itself organically, according to Williams, who can't wait to see the bond between him and his teammates grow stronger throughout the regular season and beyond.


"I think, honestly, over time," Williams said. "I think we just became close with each other and we've been here for a while, before training camp. Just always trying to improve, get to know the offense and each other better so I think that just comes with that and then it's going to be even more as the season goes on."

But what's been the biggest difference between college and the pros, thus far?


"Trying to understand the difference between going to go to class for 24 hours and stuff like that, study halls -- time management," Williams said. "Funneling that with trying to find a hobby, and also funneling more time onto the court than you could have before. Those are the biggest things."

As far as expectations, Williams isn't setting any for himself. Instead, he sees himself solely as an individual who's a part of a team, rather than a rookie who's trying to standout.


"That's always been my main focus -- how our team is doing and what we can accomplish," Williams explained. "I don't really put personal goals for myself because that's how your temple gets clouded and you see you get one-way tracked, you focus on that one thing. And if you don't accomplish it, do you say that you failed or say that you're still doing well because you're winning?

Williams and the Celtics will look to grab their first win of the season Wednesday when they kick off the year in Philadelphia against the Sixers.