Jaylen Brown on contract extension: 'Playing for the Boston Celtics isn't like playing for some of these other teams in the league' 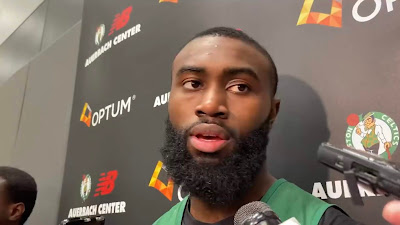 For the first time in ten years, the Celtics came to an agreement on a rookie-scale extension merely hours before the NBA's deadline on Monday.

Jaylen Brown agreed to a four-year, $115 million deal, an agreement that will keep him under contract through 2024. He was asked about the big news Tuesday afternoon, following practice at the Auerbach Center.


"It was just a normal day," Brown said. "I just came in, did the same thing I always; worked out. I let the front office (agent) Jason (Glushon) handle everything and I just treated it like a normal day."

Brown, whose new deal guarantees $103 million before incentives, lamented the fact that his new commitment to the Celtics doesn't change in terms of his approach to the coming season. According, to him nothing's changed.


"I still got the same mentality, same approach, same preparation for the season and I still got the same goals," Brown said. "So the load is still on until I get that job done because that's what it's more about. Getting a contract extension is great but I'm playing to try to win and try to help this team as much as I can."

While Brown did always have the option to test the free agency waters, if there's one thing that he's learned from his three seasons in the NBA is how special the Celtics are as a franchise.

"Once I got to look at the offer in front of me, it was easy."