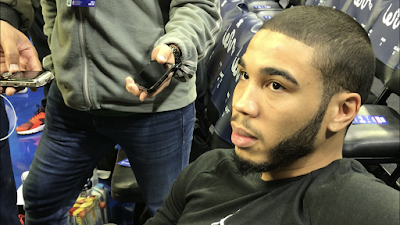 PHILADELPHIA -- For Jayson Tatum, being back at the Wells Fargo Arena brings back fond memories of the past.

It was the 2018 Eastern Conference Semifinals, Tatum's first taste of playoff basketball. The Celtics rookie was asked to step up to the task of taking on an increased role due to the season-ending injuries of Gordon Hayward and Kyrie Irving.

Alongside veteran big man Al Horford, Marcus Morris and youngsters like Terry Rozier and Jaylen Brown, Tatum flourished against the Sixers in a pivotal Game 3 matchup in Philadelphia. It was a game that the Celtics thought ended in a loss when Marco Belinelli drained a 3-pointer at the end of regulation before the officials reviewed the play and ruled it a 2-pointer -- which resulted in overtime.

Tatum polished off an epic performance, he finished with a game-high 24 points on 11-of-17 from the floor. Back in Philly for Wednesday night's season opener, Tatum was asked about being back at the Wells Fargo Arena.


"Every time I come back here I think about, you know, I've been here a lot my first two years," Tatum said. "Definitely the playoff series that we had -- I really think about Game 3. That was probably, if not, one of the funnest games I've ever been a part of. It was one of the toughest games but we were able to pull it out, that's when I think about the emotion."

Another memorable part of the game was Al Horford's game-winner in overtime following a Celtics timeout. Now, for the first time since Horford's new contract with the Sixers, Tatum will be facing off against his former teammate.


"Yeah," Tatum smiled. "It's going to be a little different now. But Al's my man but when the game starts, he's not my man."

Tatum is hoping he can continue his streak of solid season-opening offensive performances. He averaged 18.5 points the past two seasons, something that he couldn't explain, in terms of his efficiency, outside of the performances being triggered by the overall excitement of starting a new NBA season.


"Just super excited, it's the beginning of the season," Tatum said. "Everybody's emotionally high, ready to get out there and play. Usually it's kind of rough in the beginning -- everybody's trying to get into rhythm before the game so it takes a couple of minutes for everything to settle down. But everybody's going to be excited tonight, it's going to be fun."

Still, Tatum isn't holding a grudge against his former teammate for jumping ship from Boston to Philly this past summer. He's too busy looking forward to the challenge of taking down Horford and his new team.