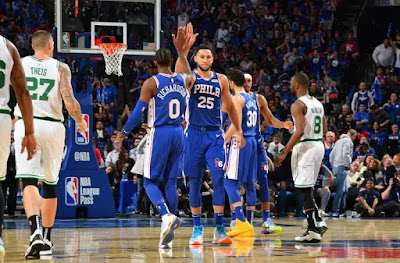 PHILADELPHIA -- The Sixers made an emphatic statement in their season opener against the Celtics Wednesday night in Philadelphia.

In a game where the Celtics clung onto a two possession lead for most of the first half, the Sixers came roaring back in the second by cleaning up the glass, clogging the lanes and forcing the Celtics to take treys and contested mid-range field goals in a 107-93 loss. Philly's defense ultimately decided this one.

Not even Gordon Hayward's (25 points) 20-point second half performance was enough to close the Celtics' deficit after the Sixers kicked off the third quarter with a 13-2 run and eventually stretched their lead to 17, while the Celtics played catch-up but never made the game interesting. Instead, Philly continued to torched Boston with its pick-and-roll defense -- which forced the Celtics to chuck up 3-pointers or take well-contested mid-range jumpshots.

Boston shot 36.7 percent from the floor, and as far as 3-pointers were concerned -- 7-of-26 wasn't going to cut it against the likes of Ben Simmons (24 points, 9 assists, 8 rebounds), Joel Embiid (15 points, 13 rebounds) and Al Horford (16 points). The trio combined for 55 points, all five starters scored in double figures, including Josh Richardson (17 points) and Tobias Harris (15 points, 15 rebounds).

But most importantly, for a team like the Sixers, all five guys got it done on the defensive end of the floor. Richardson swatted two shots, and Emiid finished with three while Horford and Simmons took turns defending the perimeter -- capitalizing on defensive stops. In other words, the Sixers' defense lived up to the off-season hype Wednesday, however, the Celtics -- a team equipped with a slew of offensive weapons -- proved that they can not only hang with Philly, like they did in the first half, but that Stevens' team may not be as far behind the Sixers as most think.


"I thought we did a lot of good things, I thought we competed," Stevens said. "I thought there were moments when we didn't protect the rim well enough as a team but obviously, we're going to have to capitalize a little bit more on the offensive end if we're going to win that game. Whether at the free-throw line or at the arc. But I'm a lot more encouraged than discouraged. I thought we really came out and fought.

"It was a heck of an environment, we played a really good team. Now we just have to get better."

Jayson Tatum finished with 21 points, 10 rebounds. He found his offense in spurts throughout the night but shot 36.4 percent from the floor.

Stevens added that he didn't necessarily have a problem with most of his team's shot selection from behind the arc. However, shooting at a 58.8 percent clip (20-of-34) from behind the charity stripe was a bigger blow for a team playing from behind throughout the second half.

Facing one of the league's better defensive teams in their first matchup certainly has its perks as Stevens and the Celtics switch their focus to the Raptors in their home opener Friday at TD Garden, where they'll look to bounce back and claim their first win of the season.

Philadelphia out-rebounded the Celtics 62-41, including 12 offensive rebounds that were converted into 17 second-chance points.