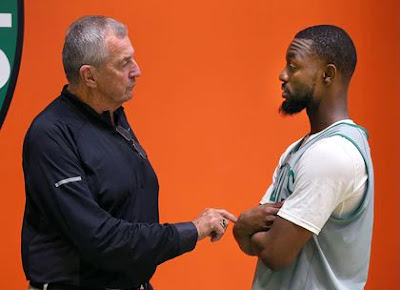 Jim Calhoun visited the Auerbach Center Wednesday to watch the Celtics' second day of training camp. It was his annual check-in that he typically makes around this time of the year.

Except this visit it was particularly special for the former Huskies head coach. Calhoun had a chance to catch up with All-Star point guard Kemba Walker, who had a feeling he'd see his former college coach.

Walker averaged 21.7 points per game throughout his junior year at UConn when he led the Huskies to the 2011 NCAA championship. Calhoun guided his team to a national title, knocking off Butler, including two guys that were also at the Auerbach Center Wednesday -- Brad Stevens and Gordon Hayward.

Calhoun believes who Stevens is as a coach along with what the Celtics stand for as an organization played a big part in Walker's decision to sign with Boston during the off-season.

Walker was ecstatic to see his former head coach.


"You know, we've been through a lot together over the course of my college career," Walker said. "Of course, we won a championship together. So it was nothing but joy to see him here."

Walker is hoping to add to another winning culture. At this stage of his professional career, it's what matters most to him, according to Calhoun, who spoke to Walker at the end of the regular season last year when the Hornets missed the postseason for the sixth time in eight years.


"'What's going to make your mind up? Because it's your decision, certainly not anybody else's," Calhoun recalled telling his former point guard.

Before the official start of free agency, Walker agreed to a four-year, $141 million deal to leave Charlotte and play for the Celtics.


"What Kemba does well is lead," Calhoun said. "Even though he's only an eight-year veteran, he's a hungry guy and he wants to win. I know talking to him last season, what's going to make up your mind? Because it's your decision. And we'd talk a lot, and he says, 'Winning.' I want to win, I'm at that point in my career.

"God's good and I've made a lot of money, but I want to win and I think he's here to win. That's his whole goal; to win."