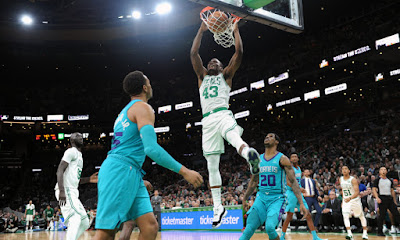 Celtics forward Javonte Green is considered to be the favorite to win Boston's final roster spot.

According to The Athletic's Shams Charania, league sources are saying all signs are pointing towards Green over guard Max Strus. The Celtics signed Strus to a two-way deal over the summer before Boston converted Tacko Fall's into its two-way, and gave Strus a partially guaranteed.

Green stood out in Summer League for the Celtics. He then wowed fans throughout the Celtics' first preseason matchup against the Hornets, where he scored 15 points on a perfect 7-for-7 from the floor, and has been surrounded with buzz ever since.

His showstopping athleticism is one eye-opening reason, but his knack for attacking the basket, off-the-ball movement and bringing energy to Brad Stevens' lineups are the main reasons he's gotten this far. Strus on the other hand, would give the Celtics' backcourt outside shooting.

His 3-point shot was on full display against the Cavaliers Sunday night at TD Garden. Strus drained 4-of-5 from behind the arc and finished with 14 points and four rebounds.

If Green is awarded the Celtics' final roster spot, Strus will most likely earn a contract with the Red Claws and join Tacko Fall and Tremont Waters, who occupies the second two-contract for Boston, in Maine for the G League.

The Celtics will be making a decision within the next few days as they prepare for their season opening matchup against the Sixers in Philadelphia next Wednesday.