Marcus Morris hurt Celtics didn’t contact him over the summer: 'I thought I deserved at least a phone call' 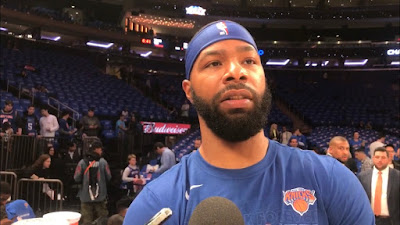 It was quite a busy summer for free agent Marcus Morris.

After balking on a two-year, $20 million deal with the Spurs, the Philly native ultimately decided to sign a one-year, $15 million offer from the Knicks instead. It was a controversial move, considering the verbal commitment that was made with San Antonio and Morris' decision to play in New York certainly didn't sit well with league executives across the league.

However, Morris has moved on from it. He's happy to be a member of the Knicks and explained that one thing he learned is that nothing is set in stone when it comes to offers in free agency.


"I'm happy here, I like it. You know Boston will always have a place in my heart but you know how it go," Morris said. "That's the NBA, you know. You think certain things are going to be there then it's not and you have to make a decision on your own. It was cool, I'll get through it. I'm happy to be here, I'm excited to get the season started."

Morris was also asked if he'd received a phone from the Celtics over the summer.


"Surprisingly, no. I didn't get a phone call," Morris said. "I didn't get anything from Boston. Very surprising but I guess that's the business. My two years there was special, I did a lot for the team. I thought I deserved at least a phone call but it is what it is."

He still keeps in touch with some of his former teammates, including Jayson Tatum, who he believes should be excited for extra touches on offense this season compared to last year.


"I talk to Jayson all the time," Morris said. "He jacking. I told him, he's jacking. He's happy he can shoot 20 shots now. I'm happy for him, I'm happy to see him grow, especially happy I was a part of his career for two years. I got to teach him some things, excited to see how good he can be."

He's already made great relationships during his short time in New York. Knicks head coach David Fizdale spoke highly of Morris -- someone Fizdale says is a team leader, and a tremendous voice in the locker room.

Morris mentioned a handful of guys he's already connected with as a member of the Knicks.


"Probably R.J. (Barrett) and Kevin Knox a little more -- for he younger guys more," Morris said. "The older guys, Taj (Gibson), you know, Wayne Ellington is from Philly so we got a lot of connections. I'm pretty happy to be here and I think they're just as excited for me to be here as I am to be here."