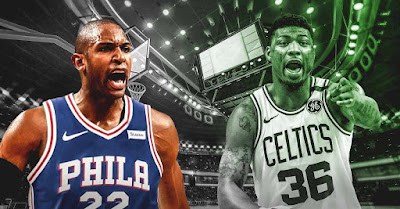 The NBA is back, as the stage has been set for the Celtics to open up the 2019-20 season against familiar faces Al Horford and the Philadelphia 76ers on Wednesday night at the Wells Fargo Center.

While both teams have revamped their rosters in the offseason, it's the Sixers who are one of the hand full of teams that are considered favorites to possibly win a championship. Even Celtics coach Brad Stevens is impressed with the new look 76ers.


"I don't know if there's a more talented team in the NBA," Stevens told reporters recently when asked about the Celtics' season opener opponents.  [The Athletic]

That's high praise coming from Stevens, who's had the Sixers' number during Philly's "Trust the Process" era the last three years. But now that the roles are sort of reversed for this rivalry that dates back decades, the Celtics will now be the underdogs when they face old friend Al Horford, who signed a four-year, $97 million deal over the summer after playing three seasons in Boston.


"It's going to be weird for me," Horford admitted. "Different facing my former team. It's probably as good of a scenario as it can be, first game of the year. It's definitely going to be different. It's not just another game. It's a big game given the rivalry between Philly and Boston." [Boston Globe]

Though it came as a somewhat surprise for some of Horford's former teammates when the free agent forward decided to take his talents to Philadelphia, Celtics guard Marcus Smart says he understands why he made the move.


"He stayed in the East, they're a championship-contending team," said Smart. "They're really good, the progress has definitely shown to be working. Al wants to win. He gave us his time here and he felt that it was time for a new chapter in his life, another chance." [Boston Herald]

Jaylen Brown spoke about Horford's decision as being the NBA norm these days when it comes to free agency, but also said his former teammate earned that right as a well-respected veteran in this league.


"Al is my guy...Not a lot of surprises these days – the NBA's crazy," Brown said. "I didn't expect him to leave, but I wasn't surprised that he did. Everybody has to do what's best for them, Al's been in this league a long time, he's a vet. Earned every paycheck he's gotten, so I wasn't surprised he decided to take care of his family.

"Al Horford's a great player, he served his time great here, and I wish him the best." [Boston Herald]

Now how ever way Celtics fans see Horford leaving to a division rival, that remains to be seen. But, emotions will be running high for not only the former Celtic big man, turned Sixer, but also for the C's new All-Star point guard Kemba Walker -- who will be officially making his debut in the green and white.

ESPN's Jeff Van Gundy believes people are "sleeping on" Walker and the Celtics when it comes to conversations of the top teams in the Eastern Conference.


"I was able to see Kemba Walker up close this summer with the World Cup team, and I'm going to tell you -- obviously everybody knows about his talent, his handles, his scoring ability -- but this is one of the highest quality athletes that we have in any sport," Van Gundy said. "He is going to be a tremendous, quiet leader for this Boston Celtics team. He leads by example doing the right thing everyday." [Yahoo Sports]

Last season didn't end well for either the Celtics or Sixers, who both were eliminated in the second round of the playoffs this past spring, after both teams had high expectations to at least meet one another in the Conference Finals.

After many battles over the years, Wednesday night's matchup between the Celtics and Sixers could set the tone for the season. And while Boston may not be looked at as contenders due to the defensive frontcourt void left by Horford and even veteran Aron Baynes, one thing remains clear when it comes to adding another chapter to this historic rivalry -- there's still no love lost between these two franchises.


"It was always intense, but I’m happy to be on the good side now," Horford said. "And I'm hoping that we're able to bring some special moments to all the people here in Philadelphia." [Clutch Points]