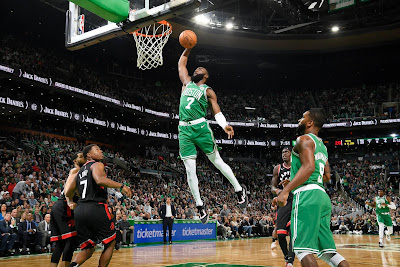 For the second straight game of the season, the Celtics got off to a slow start but in their home opener against the Raptors at TD Garden Friday night they sang a different tune in the second half.

Unlike Wednesday's loss against the Sixers, Brad Stevens' group refocused on the defensive end of the floor, found its offense in the second half and closed out the Raptors in an impressive 112-106 win. Boston had to earn this one.

Celtics and Raptors kept things close throughout the first half. Jaylen Brown got off to a hot start when he went 3-for-3 from the floor in the opening minutes, weaving through defenders and finishing strong at the rim. Kemba Walker, on the other hand, his slump from Philadelphia followed him to Boston.

Walker was 0-of-6 in the opening frame, including two missed layups before he eventually converted his first field goal of the night. Raptors big man Pascal Siakam drained his first in the second quarter, where he scored 10 points as Toronto trailed the Celtics by only one point before the break.

Brown's offensive attack in the second half picked up right where he left it in the first -- in the paint with little to no resistance and Jayson Tatum found his groove as well as both Brown and Tatum each tallied 20 points through three quarters. The dynamic duo set the stage for Walker, who caught fire in the fourth.


"Even though I struggled offensively early, I just wanted to stay in the game and not let my offense dictate my defense and I knew if I could get some stops and do anything on that end and help the team, that's what I was going to do," Walker said. "It gave me energy you know, it brought energy to the crowd as well."

However, so did the Raptors -- specifically Siakam, whose showstopping dunk assisted by a half court lob Kyle Lowry knotted things up at 104 with under four minutes left to play. A pair of 3-pointers by Gordon Hayward and Brown eventually secured a four-point lead (110-106) and when Walker coerced OG Anunoby into an offensive foul at the top of the key, Celtics fans roared in appreciation.

It wasn't the first time for Walker, who made defensive stops, including two charges, when he couldn't find his shots and it propelled his offense, especially in the second half when the Celtics needed it most. He finished with 22 points to go with a pair of steals and blocks, and Brown and Tatum each scored a team-high 25 points.


"I thought we played really good defense all night," Stevens said after the win. "There were moments where again we didn't do our job as well as we can in a pick-and-roll but I think those are just teaching moments against really good players. Kyle (Lowry) had us on skates a little bit and we had some skates and he has an ability to shoot and that scared us, we just have to be able to do first thing's first there."

Siakam led with a game-high 33 points, grabbed 8 rebounds and Kyle Lowry poured in 29 points to go with his 7 assists.

The Celtics will look to make it two in-a-row when they travel to New York to take on the Knicks in their first back-to-back set of the regular season.

The Celtics grabbed a whopping 21 offensive rebounds and converted them into 21 second-chance points. An eye-opening stat for a team that hadn't reach this feat in over five years.

It was also critical in the final minutes of the game, when Tatum pulled one down to reset the shot clock and was another dagger to the Raptors' chances of making a comeback.