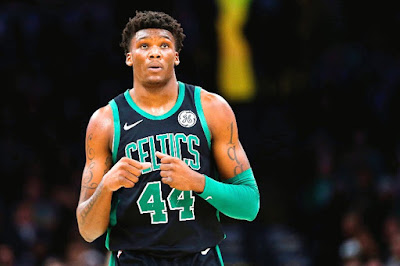 When you thought of Robert Williams III during a disappointing 2018-19 campaign, the term "savvy" was not often used in discussing the Celtics big man's basketball IQ.

Despite the length and athleticism, Williams often looked confused out on the floor. That seems to be changing. In his rookie year, he only played in 32 games and averaged 8.8 minutes per game. He has played in all three games thus far this season, including one start - averaging 5 points, 5.3 rebounds, 1.7 steals and a block in 15.7 minutes per contest.

RobWill gets the ball at the High Post (as if BOS was running Corner Offense) then quickly pivots & goes the other way for a "Chicago concept" (screen+DHO) with a Spain/Backscreen on MitchRob.


The play set up by Brad Stevens above, in the Celtics win over the Knicks on Saturday, is a classic representation of Stevens' intelligence and Williams' progression. The precise use of screens and back-screen work perfectly, allowing Gordon Hayward an almost-clear path to the hoop for the bucket.

There was no hesitation on Williams' part. He got in position for the pass - took one dribble for the hand-off - and moves right to the hoop with Hayward for the possible lob pass or rebound.

Williams has come a long way from his missed-conference-call incident following being picked at No. 27 in the 2018 NBA Draft. He attributes that missed call to a time-zone issue - which led to his "TIMELORD" moniker that needs to quietly disappear. Hey, Sam Jones once told me that he missed his first team meeting after being drafted by the Celtics with the No. 8 overall pick in 1957 and got chewed out by Red Auerbach in front of the entire team. "Where the f**k were you?" was the gentle inquiry uttered by the fiery Celtics coach, but look at how that turned out?

Williams is up to nearly 16 minutes per game this season, and that figure may double if he keeps making smart plays on both ends of the floor. Stevens has already started the year with a center-by-committee approach, especially with Daniel Theis (ankle) and Enes Kanter (knee) out with injuries right now, Williams seems the go-to guy at that position as he continues to polish a few of his rough edges.