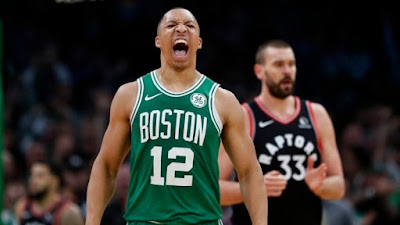 For most NBA rookies, being prepared when your name is called is the most important part of their role on their respective teams.

Earning consistent playing time isn't always easy, you have to prove yourself, specifically during the first weeks of the regular season. So when Brad Stevens sent a text message to Grant Williams Thursday night before the Celtics' home opener against the Raptors Friday, Williams was ready to take on the challenge of playing any position his head coach needed from him.


"I texted Grant yesterday and said 'You better know all of the five (positions) by tomorrow,'" Stevens laughed after Friday night's win.

Stevens' message didn't fall on deaf ears. Williams delivered on the defensive end alongside the rest of the Celtics starters, he protected the rim, defended Toronto's pick-and-roll offense and helped string together defensive stops that eventually led to a  game-closing run and a 112-106 Celtics win.


"He's worked on both 4 (power forward) and 5 (center), we just haven't played him there much. Ibaka and Gasol's shooting is a problem. You saw many times in the pick-and-roll, (we were) recovering the shooters as guys were laying it in so we got to do a better job of that.

"But Grant (Williams) did a good job. He's physical, he can make up for some of his lack of size when his body's thrown."

According to Williams, when it comes to knowing the playbook, he wasn't concerned.


"As much as I'm a nerd, I kind of knew going in," Williams laughed. "He sent that text and I was just like 'Got you, coach' and Bailey (Celtics assistant coach Brandon) texted me on the side and said, "You know the 5, right?" and I was like 'Yeah. But it's OK, I'll just go with it."

With Enes Kanter ruled out (knee contusion) of Friday's game, and Daniel Theis suffering from a second-quarter ankle injury, all of a sudden Stevens was very thin at the center spot against a very tall, physical Raptors frontcourt. Robert Williams provided some relief, and Theis eventually returned to the game but it was Grant's defense with the starting unit hat gave the Celtics head coach confidence in sticking with the rookie throughout the final frame of a tight-contested game.

It was a decision that ultimately helped Boston secure its first win of the regular season.


"Rook came out and balled," Jaylen Brown said when asked about Williams' performance. "He was physical, took some charges. He did a lot of great stuff, winning plays."

Williams clocked in 22 minutes, grabbed seven rebounds, including six offensive boards -- which were converted into seven second-chance points -- to go with his four points and four assists. His team-high in assists generated 10 points for the Celtics.

Guarding veteran big men like Marc Gasol and Serge Ibaka was certainly a learning experience for the rook, however, playing the center position for Stevens is something the first-round pick forward said he feels confident about moving forward.


"I'm comfortable at it," Williams said. "I'm expanding my game in many ways so that relief in the back in my mind is always good. It's all about competing, all about playing with some intensity -- the pace, the heart and motor that most guys don't play with at that position."