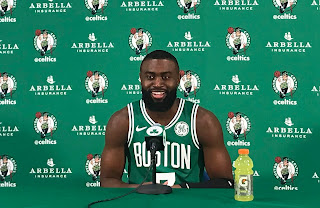 The Celtics are looking forward to a fresh start.

It was a common theme throughout Media Day on Monday, a line you heard over and over again by players returning from last season, including Marcus Smart, who even pointed out Jaylen Brown's new look as an example of his team turning over a new leaf from last season's disappointing finish.


"Yeah, it is a fresh start," Smart said. "We've all seen Jaylen Brown's hair, right? I think that kind of lets you know how fresh of a start it is."

Guys like Gordon Hayward, Jayson Tatum, and head coach Brad Stevens preached the importance of learning from last year's mistakes before heading into training camp. As the team's core of what remains from the 2018-19 Celtics roster shifts its focus to new beginnings on a clean slate.


"Our focus over the next few weeks is getting ready to play with the right effort and togetherness, and that's it," Stevens said. "I think that at the end of the day, that will give us a chance to be the best version of ourselves, and obviously at the end of the season, that's what you want to be able to point to."

As for Brown, the upcoming season isn't about setting expectations -- which is a far cry from what we've heard in the past. This is the same player who, three weeks into the 2018-19 regular season, told Taylor Rooks of Bleacher Report his plans of capturing five championships after his 28th birthday.

Brown sang a much different tune Monday in comparison to what he sounded like less than a year ago.


"I don't think (there's) any expectations I want to put on it," Brown said. "My mantra for myself and for our teammates is to just come out and hoop. Just come out and play basketball, get better every single day and see where that takes us. I've been here for four seasons now, including summer. But I learned and grew a lot.

"I've had many different roles, probably every role, pretty much, since I've been here. So I think I've grown a lot, I started out as an 18-year-old, and now I'll be 23 next month so the journey has been kind of crazy but it's been good."

His newest role with the Celtics will be an important one. Stevens will lean heavily on Brown, who is now the second-longest tenured member of the team, for production on both ends of the floor this season. And perhaps a bit of leadership for the younger members of the squad, who may not know the dangers of setting the bar too.

Hayward reminded everyone of what last year's Media Day was like for the Celtics -- a team that, by many, was a lock to represent the Eastern Conference in the 2019 NBA Finals before playing a single game. A second-round knockout -- one that ended with four consecutive losses against the Bucks --  certainly put things into perspective.

These lessons are fitting for the third overall pick of the 2016 NBA Draft as he enters the final year of his rookie contract. However, if Brown plans on sticking around, he's going to have to prove it around these parts.

Historically, Celtics president of basketball operations Danny Ainge isn't keen on extending rookie deals prior to free agency. Ainge will turn to a player's 'prove it' season, also known as his contract year, to determine one's future in Boston.

It's what kept guys like Rajon Rondo, Avery Bradley, and Marcus Smart around for four-plus years, but for guys like Kelly Olynyk and most recently Terry Rozier, it was the season that led them to greener pastures.

Rozier cashed in on a three-year, $58 million deal with the Hornets and Olynyk inked a four-year, $50 million contract with the Heat back in 2017. Brown has a chance to earn a higher raise than both.

In a free agency pool headlined by Anthony Davis, Kyrle Lowry, DeMar DeRozan, and Pascal Siakam, expect Brown to be a hot commodity. One breakout season would be enough proof that his ceiling is higher than most available 23-year-olds in the league.

It's the reason why Philadelphia committed to All-Star Ben Simmons via a five-year, $170 million deal this past summer, and why Jamal Murray, who was drafted at No. 7 in the same class, came to an agreement with the Nuggets on the same terms to stay in Denver.

Brown was asked about his mindset heading into training camp with the Oct. 21 deadline -- the final day the Celtics and Brown can agree on an extension -- looming over him.


"To be honest, I haven't put too much thought into it," Brown said. "I'm not losing any sleep over it. I think stuff like that will end up working itself out in the end or however. So I'm just focused on this season and playing basketball. I think that's my number one emphasis, and let the chips fall where they may."