The Truth is Pierce wanted out of Boston 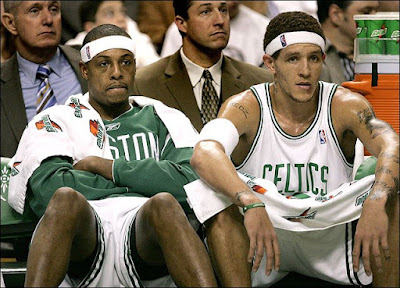 When you think of recent Boston sports icons names like Tom Brady, David Ortiz and of course Paul Pierce come to mind. Could you picture the likes of 'The Truth' not being a part of the NBA's most storied franchise that is the Boston Celtics for a decade and a half?

It nearly became a reality 10-years ago when the franchise with the most championship banners in professional basketball were looking forward to ping-pong balls to rebuild rather than bringing in veteran superstars.

It's no surprise to Celtics fans that between the end of the 'Antoine Walker' era and the beginning of the new 'Big-Three' era, team captain at the time, Paul Pierce, wanted a change of scenery.

Fresh off a trip to the Eastern Conference Finals in 2002, where the C's were two-games away from an opportunity to fight for an NBA championship, the perception of raising a 17th Larry O'Brien trophy were not that far fetch. At least for some Celtics fans, it didn't seem like a pipe dream.

But for the next couple of seasons, a change in ownership (Wyc and Co.), president of basketball operations (Danny Ainge), head coaches (John Carroll, Doc Rivers) and of course the many roster moves, had quite a few believing, especially Pierce, that the Celtics were regressing instead of moving towards being actual contenders.

In an interview with Chris Mannix of Yahoo! Sports on the Vertical Podcast, Pierce opens up about a time when he didn't get along with Doc Rivers and did not want to be a part of a rebuilding process in Boston and wanted to join Dirk Nowitzki (also in Pierce's draft class of 1998, ninth overall) and Steve Nash in Dallas to try and win there.

"If you can get me to Dallas, that's where I wanted to go at the time," Pierce said. "I thought [the Mavericks] was a player like away from winning. They were 50-games winners. Dirk was pretty much by himself. I even ran into Dirk and Mark Cuban that summer. It was like 'Mark, you've got to find a way to get me over there. I want to get over there. I think I could get help you all get over the hump." [Yahoo! Sports]

Talk about a 'Phew, thank God that didn't happen' moment.

It's hard to even imagine the Celtics attempting to make any sort of run to the Finals so many years later without number 34 leading the way, never mind winning it all in 2008. This generation's Larry Bird sort of speak for younger C's fans, and a sure lock first ballot hall-of-famer might not have became one of the greatest Celtic of all-time.

The Truth also spoke about his high school and college days, along with the 'Antione' years. He didn't hold back on the topic of the end coming for the new Big-3 sooner than he would have hoped.

"I felt like if we added a couple of more pieces, we still had something to give, said Pierce referring to his last season in Boston. "[Rondo went down] we knew it would have been tough to win that year with him blossoming into an elite player, but with the contributions that me and Kevin [Garnett] could give, if Ray [Allen] stuck around, we were still a team that could be dangerous. You look at San Antonio and what they doing today, they got an older Duncan, Ginobili and Parker but they have been able to add the pieces around them to where they're still elite. I feel like that was something we could have done." [Yahoo! Sports]

It seems like since Pierce's exit from Boston in 2013, everyone wants to hear as many stories as possible about his time there. Although he's now a L.A. Clipper where he has reunited with coach Rivers (his third team in three years), he'll always be a Celtic in the eyes of common Boston sports fans, despite the ending they got.

"I wish I could have ended my career in Boston," Pierce admits. "Everybody knew I wanted to be a Celtic for life."

The question that stuck out to me the most in this interview was, is there's any game in Pierce's career, he wishes he could have back? Any true follower of the Celtics should already know the answer to this one.

"The one game that haunts me the most is Game 7 2010," said Pierce referring the Celtics loss to the L.A. Lakers in the Finals. "Up double digits and being one of the stingiest defense in the league...That game I still haven't watched." [Yahoo! Sports]

I believe most of the Celtics faithful can relate and share the same sentiment. My apologies to those still in mourning.

Besides the fact we learn Mannix used to be a ball-boy for Pierce and the Celtics back in the day (got to love the irony there), overall I enjoyed the one-on-one that has what seems like become a yearly thing now with the national media.


Check out the full interview on the podcast by clicking here