Should the Celtics be sellers at the deadline? 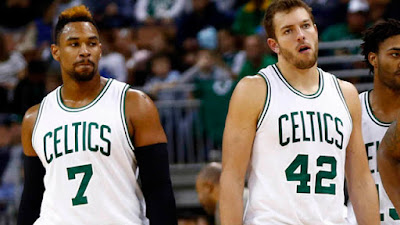 The Celtics are 19-17 and tied for the final spot in Eastern Conference playoffs. Recent home losses to the Nets, Lakers, Pistons and now the Bulls on the road have some players upset over rotations and fans are starting to get mad about inconsistency. Being in the postseason picture, you would assume the C's might look to bolster their team for a playoff run, especially in the east which only has one true elite team. But it may actually be beneficial for Boston to look to sell.


Why sell at the deadline? Well quite simply, this team isn't quite ready to be a contender just yet. There's just not enough talent for them to win the east. With plenty of picks, young players, and cap space, the team is still in a really good spot for the future, just not this year. Along with not being championship contenders, this team has hit its first turmoil of the season this past week. A few payers pointing to the lack of a consistent rotation, and David Lee starting to voice his frustrations over his benching. What's the main reason for this? Depth and the amount of players who expect playing time on the team.

The Celtics frontcourt is absurdly crowded, with Olynyk, Johnson, Sullinger, Zeller, Lee, and Jerebko all expecting  to see the court. With Brad Stevens' desire to play small more often, and promising second rounder Jordan Mickey patiently waiting, there will be a few big men who just simply won't see consistent playing time. Moving two big men would create much less pressure on Stevens to keep the whole locker room happy, while still allowing the C's to have a reasonable amount of depth and maybe giving Mickey a chance to show he can play. So who should be moved?

David Lee: He's older, and on an expiring contract. He expects to play consistently every night, but his poor defense and inconsistent offense leaves much to be desired. The Celtics are better with him on the bench, and in my opinion should try to trade him for almost anything available. If he keeps getting DNP's he is just going to create a distraction. There doesn't seem to be much of a place in Boston for him.

Jared Sullinger: David Lee is a obvious candidate to be traded, but Sully is a less obvious one. Sullinger has struggled of late, posting an abysmal 39% true shooting percentage for the month of December. While this is a small sample size, he has never posted above a 50% true shooting percentage in his career. He isn't an efficient scorer, not a great playmaker, and is not a rim protector. He is a really good rebounder, and does provide some value, but trading him might be the way to go. The young vet has an expiring contract with an injury history and a weight problem, who may be demanding quite the pay day this upcoming summer. Trading him may net the Celtics a draft pick or decent young player, unlike Lee who has lesser value.

Tyler Zeller: Zeller has struggled to see the court this year, and is also a restricted free agent. He is a good defender, finisher, and legit 7-footer. Zeller could step into Sullinger's role if he is traded or could net the Celtics into an asset in a trade. Moving him could open up the opportunity for Mickey to get some spot minutes as well, aiding his development in the process.

This year in the NBA, the majority of teams are still in the playoff hunt. The standings are jumbled and not many teams are willing to throw in the towel yet. The market to sell players could be higher than most years, and the Celtics could benefit from that while still being competitive. I don't think moving Sully, Lee, or Zeller would compromise the Celtics chances at making the playoffs too much, these three guys are replaceable and the Celtics have the luxury of going small with Jae Crowder in the mix.

The number one goal should still be to trade for a star, but if those cards aren't there, the play may be to trade some big men to keep the players happy and acquire some assets.


Let me know what you think.
Will Burke